I was having a hard time finding secure bike parking, other than the typical street sign post or the single racks that could hold 2 bikes at the most. Many parks have the ribbon style, "wheel bender" racks, but they were not sufficient with the large numbers of bikes that are on the streets and need a place to be stored. 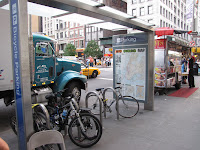 In my exploration of the city, I have found some of the city's newest investment in bicycle parking. The city is installing small kiosk type racks that come with signage and maps of bike routes through the city. They are really clean and give a sense of increased safety, since it would be pretty obvious if you saw someone maneuvering with a pair of bolt cutters in the wide open area of the kiosks. 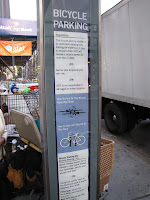 Another initiative that the city is fostering is a new local law that went into affect last December. Office building tenants may file requests with the city for bike access. Bikes in Buildings Program is expected to lead to a broad expansion of bike parking at commercial office buildings across the city and encourage continued growth in the number of commuter cyclists on city streets. Commuter cycling in New York is already accelerating rapidly, with a 26% increase in just the last year alone, and has more than doubled since 2005. A lack of secure bike access and parking at the office is one of the biggest deal-breakers for commuters who want to get to work by bike. As commuter cycling continues to grow, this new law unlocks a barrier that has stopped an untold number of bike commutes before they even started.
Another initiative for business owners and residents is the City Racks Program. City Racks provides FREE installation of sidewalk bicycle parking racks throughout New York City to encourage cycling for commuting, short trips, and errands. By providing convenient parking to the cycling community, businesses can expand their client base and improve customer satisfaction. The availability of bike parking discourages cyclists from
parking at mailboxes, parking meters, trees, and other sidewalk structures.
Biking is a great way to get to work in New York City and ride around to tour the city, and these new programs makes it easier for workers and visitors to travel on two wheels instead of four. By creating a safe, secure place for cyclists to store their bikes, it helps to promote alternative modes of transportation and a healthy, active lifestyle for millions of New Yorkers.
Newer Post Older Post Home