Another Contraflow Lane Opens in DC

DDOT just activated the new contraflow bike lanes on the two blocks of New Hampshire Avenue connecting from U Street. Cyclists traveling against the flow of car traffic now have separate lanes in which to travel all the way to the crossroads of U Street, 16th Street, and New Hampshire Avenue. 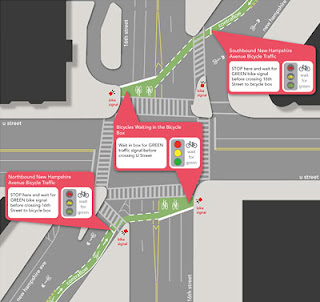 This is a pilot project for DDOT and there are a few kinks to work out. First, the bike signals are not placed in ideal positions. Look carefully at southwest corner of the diagram above. Notice that a cyclist stopped at the stop line on New Hampshire Avenue does not directly face a bike signal. The cyclist must know to look to the right and to look up to heights that are unusual for bike signage.

In much of the world, bike signals are placed five to seven feet above the ground. Even if the signals cannot be located to other poles, lowering them on their existing poles could help.

Second, there are induction loops embedded in the pavement to sense a waiting cyclist but there's no indication that cyclists should wait exactly at the stop line in order to trip the sensor. While filming, we pulled to the curb to stop and failed to trip the sensor.

This is merely the first step in DDOT's plan to reconfigure the intersection, which suffers a high number of pedestrian injuries. Until now, these two blocks of New Hampshire Avenue have been the missing link between the New Hampshire Avenue bike lanes and Sixteenth Street and the bike lanes on T and V Streets (eastbound and westbound, respectively).
Newer Post Older Post Home