Be Spoke at Museum of Art and Design 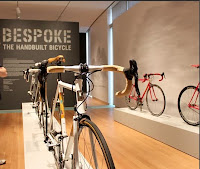 Our apartment while I am working up in New York just happens to be at Columbus Circle, which has me at the southern end of Central Park and a major hub for people riding down Broadway and along the main arteries of the city. it also puts me across the street from the Museum of Art and Design and across from their current exhibition called Be Spoke. Be Spoke is displaying some of the best examples of these custom built bikes and they provide any bike fan enough eye candy to last a good while.

This exhibition features the designs of six internationally renowned bicycle builders who have authored some of the most revolutionary developments in their craft. Through their manipulation of steel, aluminum and titanium, these artisans produce racing bicycles for champion athletes, mountain and cyclocross bicycles for negotiating vertiginous terrain, urban bicycles for stylishly transporting commuters, and elegantly stripped down bicycles for epic journeys.

In the past, bicycles were often crafted by hand to precisely fit a rider's measurements and tastes. In the 1980s and 1990s the demand for handbuilt bicycles was eclipsed by the popularity of factory-produced racing bikes endorsed by star cyclists. Custom frame builders had to contend with a new and booming market for mass-manufactured mountain bikes. Over the past decade, renewed interest in craft, coupled with a rising social movement favoring the durable over the disposable and supporting cycling's physical and environmental benefits, has contributed to a revival of handbuilt bicycles and fostered a new generation of artisans and clientele.