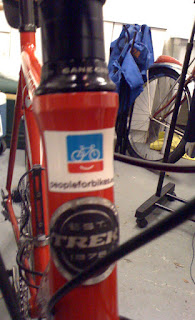 Yesterday peopleforbikes.org surpassed 100,000 pledges in support of better bicycling in the U.S. Thanks for quickly recognizing the value of the movement, signing the pledge, and spreading the word! They are well on their way to showing our elected leaders and the public that people across the entire country believe that bicycling is important and should be promoted.

Only a month ago, they were at 60,000 pledges. They've nearly doubled in the last 30 days --that's major momentum! Did you know that in the past six months since PFB first launched...
Follow the PFB blog, Twitter feed, or Facebook page to get these updates as they happen.

Help them get to 200,000
Do you have any friends/family/coworkers/landlords/long-lost college roommates/pizza delivery guys/pets (ok, maybe not pets) who like to ride bikes, but haven't signed the pledge yet? Tell them today. If each of us got one person to sign the pledge this weekend, we'd double the size of our movement. Whether they cruise around the block once a year, or commute by bike to work every day, PFB wants to unite their voice with a million others to make bicycling in America safer, more convenient, and fun for everyone.

Track their progress
You can follow our continued progress toward one million names on the PFB homepage with the interactive pledge tracker -- even see how your state is doing compared to other states. Riders from Georgia were psyched to be able to track how their state stacked up in the pledge count. They've been on a mission to get as many Georgia pledge-signers as possible, and moved up from rank #47 to #9 in ten days! Think your state can do better? Rally local riders you know to join in this friendly competition by signing the peopleforbikes.org pledge. In the end, we'll all benefit with a bike-friendly America.
Newer Post Older Post Home