THE wheels on bikes haven’t been reinvented, but the chains may be getting an update. This morning I was moving my bike and bounced my chain off and got to go through the fun experience of putting a greasy chain back on. Nothing kicks the day off better than having grease stained fingers.

How ironic that I looked at the NYTimes and saw that they had an interesting article about a new type of bike chain. I have seen several of the new belt drives, but this article exposes where the technology is heading. The clinking roller chains that are now standard on most bicycles have long had a drawback known to any cyclist: they become grimy, and can soil a pants leg or a skirt. That’s because the metal links must be oiled regularly, and the oil attracts dirt. Hence the black grease getting on my fingers this morning.

Now companies are developing new designs and materials to replace these chains with grease-free alternatives like polymer cables or belts toughened with carbon fibers.

The Gates Corporation in Denver, a maker of industrial and auto parts, offers belt-driven systems for biking that, unlike chains, require no lubrication. The belts, made of polyurethane and shot through with carbon cords to give them tensile strength, have teeth on one side that engage with metal pulleys to turn the belt as the pedals rotate. Other companies offering belt-drive systems for bicycles include Schlumpf Innovations in Vilters, Switzerland, and CycleDrive Systems in Foxborough, Mass.

Belt-driven systems were first used primarily on single-speed mountain bikes but are now appearing on multigeared commuter and city bikes as well. They last much longer than chains, and are quiet and clean. In a perfect world, everyone would probably use them because they require less maintenance.

But new belt-driven systems are likely to be a bit more expensive than chains, and can be installed only on frames adapted to their use. That’s because links in metal chains can usually be popped open to slide a chain into position. But much like the timing belts on car engine, the new, continuous bike belts cannot be opened. Instead, the bicycle frame must have an opening, typically in the back, to let the belt pass through for installation.

Belt drives are now included in models from 24 companies, including Trek, Specialized Globe and Raleigh. The systems, which have one belt and front and rear pulleys, can also be bought from many frame manufacturers for use in customized bikes. Prices for the system seem to range from $150 to $280. 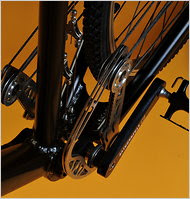 Another chainless bike, the StringBike, is being developed in Budapest by the inventor Robert Kohlheb and his business partner, Mihaly Lantos, a patent lawyer. The bike replaces the chain and sprockets with a symmetrical combination of pivoting levers, pulleys and polyethylene cables or “strings” on both sides. (Mr. Lantos chose the word “strings” in part because he is a lover of classical music.)

When the right foot pushes the pedal down, a lever pivots. The pulleys attached to the lever go forward, pulling the cables with them to propel the back wheel. Then, as the left foot pushes down, the action is repeated on the other side. Prototypes of the bike have been shown at trade shows in Cologne, Germany, and Padua, Italy.

The bikes’ development was financed predominantly by the two men, with additional support from the Hungarian government. Schwinn-Csepel, a bicycle company in Budapest, has been licensed to assemble and sell the bikes within Europe. The price will probably be 2,500 to 3,000 euros (about $3,500 to $4,200).

As bike lanes are added to more city streets, chainless drive systems may catch on with urbanites looking for low-maintenance solutions. I think the belt-driven system will start to quietly encroach on the urban pavement market similarly to e-bikes, folding bikes, and any of the other commuter technologies.
Newer Post Older Post Home