Halloween is a very busy weekend in Orlando and this year was no exception. 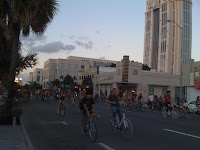 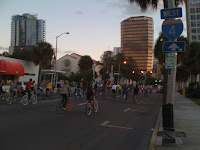 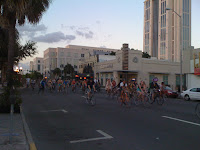 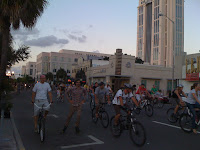 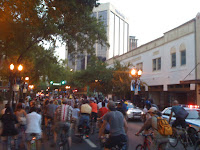 The Halloween Critical Mass ride on Friday night was a good showing and had several riders that dressed in costumes. The ride was without any altercations with police, even though they were parked at several locations along the route to make sure that everything was orderly. The ride was large enough that we took up all three lanes on Orange Avenue. It always feels good to take back the streets and draw attention to cyclists and alert automobiles about bikes being on the road.

Saturday was a typical Lakemont group ride. We got an update on Marty Katz, the Lakemont rider who was struck by a car a little before dawn on Tuesday, October 12, while stopped at a light on Horatio Avenue in Maitland. You can keep tabs on his progress - go here ->  http://www.caringbridge.org/visit/martykatzrecovery and register - you’ll then get daily reports from Team Marty.  Marty is still in very serious condition but some good things have been happening this week. He is OFF THE VENT and breathing on his own and speaking through the trach.  He wants a beer, he wants his coffee, he wants to get up and walk, he wants out of there!  And, as soon as a bed is available, he will be moved out of ICU.  These are positive steps, but no one should be fooled: Marty’s got a long road ahead of him with several surgeries to go.Show your support, register at the caringbridge.com site and let the family know you’re a cyclist and you’re following Marty’s recovery.

Saturday night was downtown Orlando's Halloween celebration, and this year I went as a doping cyclist, but I abandoned my blood transfusion gear to be more comfortable amongst the mass of people. Many people just assumed that I was Lance Armstrong, since I had a Radio Shack jersey on. Either way, it was pretty fun just walking around in a full kit and having people know who/what I was.
Newer Post Older Post Home