Biking on the Appian Way 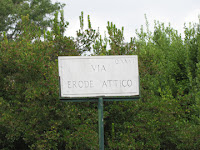 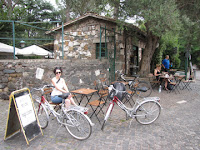 The Appian Way used to be known as the “Regina Viarum,” the queen of all roads, and since we were already in Rome, we had to end our trip with a ride through the countryside on this historic roadway.


There is probably no other place in Rome that gives you such a strong sense of stepping back into the past, or its remains at least. Even strolling through the Roman Forum, thoughts of mutinous senators or vainglorious emperors are constantly intruded upon by modern-day traffic. Because the Appian Way is protected within a regional park, the only intrusions tend to be bikers, joggers, and tourists, of which there are surprisingly few. On Sundays and holidays, especially, all the roads inside the park (there are private residences) are closed to traffic, so the riding is particularly good. 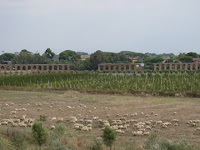 Only a few tracts of the Appia are still lined with ‘basoli’ (huge polygonally-cut stones of basalt rock) that paved the ancient road (originally about 12 feet wide, enough for two carriages to cross). The basoli are very well worn with deep grooves and murder to ride on. At these points, we hoisted our bikes to the side of the road and rode along the dirt path that other cyclists have worn to avoid the bumpy stretches. Either way, it felt pretty amazing to ride on stones that chariots did 2000 years ago.

Historically the road wasn't just for transportation. In Rome's early years, people weren't allowed to be buried inside the city walls, so emperors and rich citizens purchased land along the Appian Way to build their tombs and be buried. This has created miles and miles of crumbling tombs and statuary marking the locations.

On one of the side roads, there are several churches and catacombs. Since the third century the San Callisto catacombs have been the most important Christian burial place in Rome and even seeing a fraction of the hundreds of kilometers of underground burials that honeycomb the Appian Way give an eerie sense of life as an early Christian in pagan Rome. The road through the San Callisto catacombs emerges on the Appia near the catacombs of San Sebastiano, and this is where the going gets really historical. 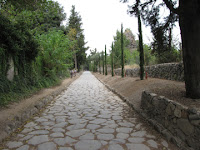 In recent years new sites have opened along the Appian Way as the park – which was founded in 1988 – has developed. You can now visit the fourth century A.D. Circus (for chariots, not bikes) and imperial residence of Maxentius. The villa includes a mausoleum known as the Tomb of Romolus, named for Maxentius’s son who was buried here in 309 AD.

Next to it is the grandest tomb (11 meters high, 29.5 meters in diameter) on the Appian Way, dedicated to Cecilia Metella, and erected in 50 B.C. In the Middle Ages it was annexed to a fortified castle which expanded over the centuries. This tomb is the start to more than ten kilometers’ worth of sepulchers and funerary monuments. They were all shapes and sizes. Most have been stripped of their marble exteriors, but you can still see the odd statue or stele along the way.


Some sections allow detours down side roads that lead to ancient aqueducts and hidden ruins. The Villa dei Quintili, just beyond the sixth mile, was once the largest suburban villa of Rome. The Casal Rotondo, the largest tomb, dates from the time of Augustus, but later evolved into the farmhouse that gave it its name.


There may be no better way, to view the hills that surround Rome. The vista along the last stretch, with most of Rome behind you, is pretty awesome, to say the least.