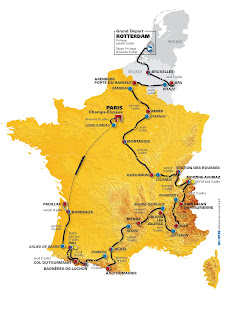 I am going to try to not just write about the Tour de France for the next month, but it will be taking up most of my time. I love watching road races and Versus Channel has really helped the ease of viewing. I will still be watching live each morning on Steephill.tv, but their recap shows each night make it pretty nice to see what I may miss when I have to do some work away from my computer.

Below is a pretty cool video that shows the stages in a 3D fly through. I am also listing my 12 riders to watch in this year's Tour. They are listed alphabetically:

Alberto Contador is the man to beat for a second straight year, any one of these 12 could win the Tour de France this year. I will go further and say that the top three in Paris all figure among these 12 names. The Tour rarely produces a surprise result. These are the men who will worry excessively about the first few days of the race as far as Reims, where crosswinds in Holland and bad roads in Belgium will make it a nervous period for those with big intentions.

Do not miss the early days thinking everything will happen in the mountains. People like Contador, Michael Rogers and Bradley Wiggins will be happier when the Alps are reached and that they are still in contention, for some of the above names will not be after this very dangerous opening week. With only one time trial this year (with the exception of the usual short Prologue in Rotterdam, Holland) the route appears to favor the climbers.

This is not surprising, as the race celebrates 100 years of scaling the heights of France. The Pyrenees with the Col du Tourmalet the star of a tough last period of racing with a finish and a crossing included on the mountain, came into the race in 1910 to the cries of "assassins" and "murderers" from the riders. But without France's two famous mountain chains, the race would have died many years ago.

Lance Armstrong, in his 39th year, would not be starting his 13th Tour if he did not believe he could win it. He arrives with his new custom-assembled RadioShack team many of whom rode with him in 2009 as members of the often acrimonious Astana team, for whom Contador still races. If the great Texan who has suffered sickness and crashes this year before finishing second in the recent Tour of Switzerland, is to win for an eighth time, then he must get time on Contador before the mountains are encountered.

Contador, is the undisputed best climber in the World, but has not showed the great form necessary to win a third Tour de France and with the Schleck brothers, Australian Cadel Evans and perhaps Bradley Wiggins, all out to attack him when he's least expecting it, the Spaniard will assuredly have his hands full. Contador beat Andy Schleck by 4mins 11sec last year, with Armstrong far from content with third place a further 1min 13sec back. This year Andy has done nothing to inspire confidence in his fitness and it could be that his elder brother Frank, the winner of the Tour of Switzerland, will be the protected rider on the Saxo Bank team.

The first mountain stage comes after a week of racing in which 700 miles will have been covered, with a previously uncharted journey through the Jura hills to the Station des Rousses. The weather there can be very cold and wet and is followed the next day by the Alps proper as the field finishes atop the ski station of Avoriaz, near Morzine, where it has not been for 16 years. It was in the Juras where Armstrong abandoned the race in 1996 complaining of a heavy cold, and was later in the year diagnosed with cancer.

Once the Alps are over, it is through the heat of the far South as the link is made to the Pyrenees, where a finish on top of the Col du Tourmalet will be the highlight of four very hard days that will favor the great climbers. The only time trial follows for those with the strength left, near Bordeaux, where the heat can sap whatever power is left in the bronzed legs of the survivors. Levi Leipheimer could well show his strength here as he has done in the past. In 2007 he finished third overall after he won the final time trial over a similar distance in Angouleme, beating Evans by 51secs. He lost the Tour by a meager 31secs the next day in Paris.

American supporters will also be cheering the sprinters on the days they have a chance of victory. Tyler Farrar has developed into one of the fastest on the pro circuit and with five wins already this year, the Garmin-Transistions rider will be ready to win his first Tour stages. I am also looking forward to see Mark Cavendish win the green jersey and show the world why he is the best sprinter in the world.