The Rise of Walking and Biking 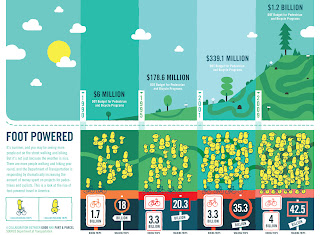 A friend of mine sent me this graphic from Good,and it shows how dramatically people are starting to realize that commuting, carbon emissions, and city planning are all inextricably linked. The graph suggests that a rise in biking and walking aren't spontaneous trends brought about by more thoughtful consumers (or even rising gas prices, as many have guessed). Rather, the rise of people-powered commuting has a direct correlation with the amount of money being spent by the DOT on pedestrian and bike programs.

So while you can gripe about the government's ability to spend money well, in this case it does seem to be having the intended effect--since 1995, walking trips have increased by over 100%, and bike trips have increased by 700 million a year, a rise of 20%. Ray LaHood, the U.S. Secretary of Transportation, has just announced a "sea-change" in American transit planning: As he writes on his blog, "People across America who value bicycling should have a voice when it comes to transportation planning. This is the end of favoring motorized transportation at the expense of non-motorized."

LaHood's announcement has been bubbling for some time: The DOT is already funding bike-lane initiatives in Philadelphia and Indianapolis, and LaHood, a darling among green-minded urban planners, has a penchant for dropping by bike conferences and getting everyone all fired up. But this latest news is backed by a set of eight guidelines, which will be sent to state DOT's and communities:
Which frankly all sounds rather dull, but here's the important thing: LaHood, as Transportation Secretary, is essentially saying, "If you want federal DOT dollars, you better think more seriously about adding bike paths to the projects you propose."

The hope then is that communities adopt similar guidelines, and that these will be baked into new infrastructure proposals. It's a rather circuitous path--and comes far short of a mandate--but this is a crucial start. And when local city planners get with the program, they'll find a wealth of ideas out there--from bicycle highways to solar bike sheds to safer bike lanes.