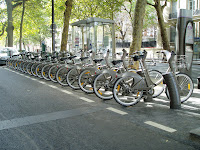 Mayor Daley announced at the Bike to Work Week Rally last week that Chicago is getting a bike share program come July. He's been talking about this for many years, so we're glad it's finally happening. Chicago is following Denver's lead and using the B-cycle bike-share program, which seems to have been quite popular there since it started in April with 500 bikes and over 18,000 rides so far.


In Chicago, riders will need to have a membership card to get a bike and lock (helmet not included). Cards are $10 for one day, or $35 for 30 days, $45 for 60 days, and $55 for 90 days. The first half-hour on the bike is free, and each additional half hour is $2.50. Bikes will be available for pickup at McCormick Place, Museum Campus, Buckingham Fountain, the Chicago Park District headquarters at 541 N. Fairbanks Ct., and two downtown locations to be announced. Drop-offs are at any B-station, Navy Pier, North Avenue beach, Millennium Park, and any Bike & Roll rental station.

Even though these prices appear pretty steep for renting a bike, other cities with the program have shown that most riders get a bike and return it to a station in less than 30 minutes and aren't charged anything. Some cities have lowered their prices after they get the stations set up and a network established. The higher prices are just to get the system in place and to cover the initial investment. Either way, these stations will be another gem in Chicago's great bicycle culture. It is also another example of how bike sharing is spreading across the country and cities that care about bikes are taking great steps at getting more people on them.
Newer Post Older Post Home