15yr Study Finds Biking and Walking on the Increase 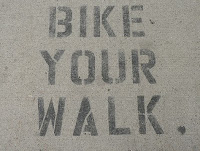 A 15-year report was just released by the U.S. Department of Transportation and the Federal Highway Administration that shows a 25% increase in trips by bike and walking since 2001. The National Bicycling and Walking Study: 15-Year Status Report has been following the action since 1994, and the news is (mostly) good - in the U.S. we've reversed a trend of decreasing trips by biking and walking. And the Obama Administration spent $1.2 billion on bike and walk programs in 2009. That is, however, just 2% of the country's transportation budget going to improving infrastructure and conditions for pedestrians and cyclists. Imagine what could be done with a bike/ped budget rivaling that of a city such as Amsterdam?

The two major achievements of the last 15 years, according to the report:

1) A decrease in fatalities and 2) an increase in the overall number of trips taken by bike and on foot.

Since safety is one of the key reasons more people say they don't bike, I would say that the first finding is pretty huge. Here are some other statistics showing that biking tends to be safer (per million hours of activity) than riding in a car or on other motorized vehicles. It is also, as pointed out here in Grist, safer than doing nothing at all.

On the other hand, Rutgers has statistics quoted in this Freakanomics article that finds cyclists to be 12 times more likely to suffer a fatal crash than car drivers. Meanwhile, the same study found going by foot 23 times more dangerous than traveling by car. Now, balance those statistics against the Danish study that found non-cyclists to have a 39 percent higher mortality rate than cyclists.

What the 15-year report concludes is that pedestrian and bike fatalities have dropped 20.6 percent in the reporting period, surpassing the 10 percent improvement goal that the the Department of Transportation and the Federal Highway Administration said they were aiming for. The number of people dying in bike crashes tends to hover between 700 and 800 each year, however, which is still high, while pedestrian deaths waver between 5,000 to about 6,500.

That translates to 42.5 billion walking trips in 2009, and 4 billion bicycle trips annually in the U.S.
Newer Post Older Post Home