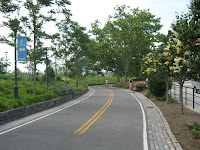 Other than biking through Central Park, down Broadway and Times Square, and amongst the fearless messenger and couriers, biking on the East River and Hudson River Bike Paths was a highlight of my trip.The Manhattan Waterfront Greenway is a 32-mile long walking and bicycling path around the island of Manhattan. I only had time to ride about 15-20 miles of the trails, but what I saw made me want to do it again on my next visit and hit new areas of the city. 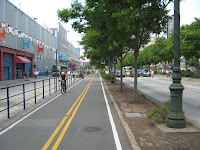 I first hit the Hudson River side after rolling down through Times Square and Broadway and needed a way back up north to see Central Park. This trail skirted along the river and included several parks that engaged the river and provided breathtaking views across the river and back toward the city itself. The trail is used by cyclists of all types, rollerbladers, and runners/walkers. It also connected up to Riverside Park and after riding through parts of it,  I cut across to Harlem, even though the trail continued northward. 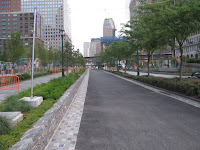 After riding through Central Park, I again rolled through Times Square and along several of their bike lanes to end up at Battery Park and the entrance to the East River Bike Path. This too had beautiful views across to Brooklyn and along the Esplanade. It also provided access to cross the Brooklyn Bridge and was being used by all types of passive and active recreation. 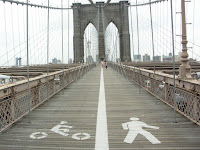 On my next trip to NYC, I want to go farther north on this trail and explore Brooklyn. The best thing was that as a visitor to this major city, I was able to get around the city with ease because of their extensive network of bike facilities. I was also able to travel great distances by riding on the Manhattan Waterfront Greenway trails and could see where using them as major arteries for north-south travel makes cycling one of the easiest ways to get around New York City.