It is May 16th and another beautiful day in Florida. I rode the Lakemont Ride yesterday, which has added a 4th group to it, so there are even more riders coming out. The D Group is being led by Billy Hattaway, a past co-worker with me and a really good guy. The ride is 40 miles with a stop halfway and a pace that is a consistent 18-20mph, with no drops. I encourage any of my rider friends that may have been intimidated by the other groups, because of their speed and intensity, to try out this ride and get into the Lakemont experience. 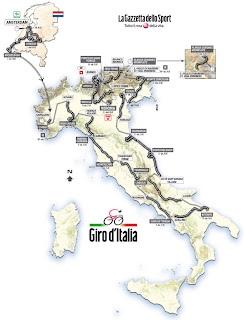 The other great parts of it being May 16, is the Giro d'Italia is on stage 8, the Tour of California starts this afternoon, and Bike Month is halfway finished. The Giro d'Italia is always a tricky race and this year has been no different. Several of the big name riders (Armstrong and the Radioshack team, Mark Cavendish (HTC-Columbia), Andy Schleck and Fabian Cancellara (Saxo Bank), Tom Danielson (Garmin-Transitions), Tom Boonen (Quick Step), and Lars Boom (Rabobank), Heinrich Haussler (Cervelo Test Team) and US Champion George Hincapie (BMC Racing)) are not there because they are riding in the Tour of California this week. The World Champion from Australia, Cadel Evans (BMC), is currently leading in the Giro and the race has been full of crashes, beautiful Italian scenery, and typical race antics. The Tour of California is a good primer for the Tour de France and many riders are choosing to ride it instead of the Giro, because it isn't as long and taxing and they can go all out for just 8 stages and make adjustments for the Tour de France. 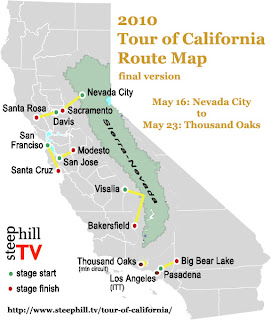 Tomorrow stats the official Bike Week, so I am hoping for many new cyclists out on the road. Coordinate riding to work with friends and co-workers and try to ride on days other than your city's Bike to Work Day. Give commuting by bike a chance for a week and I promise that you will see how easy it can be and you might get hooked.
Newer Post Older Post Home