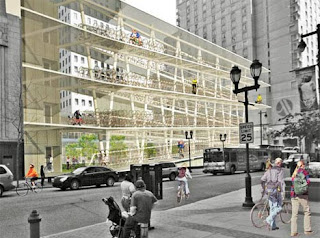 Here's a great example of forward-thinking urban planning: a downtown, all-in-one bicycle parking facility that prioritizes human-powered transportation. The competition entry BIKE for the Delaware Valley Green Building Council by architect Annie Scheel recently won first place - and for good reason. It's a proposal would not only reduce urban congestion and pollution in downtown Philadelphia, but also would include all the bike-related bells and whistles, making the bike a more attractive choice for city commuters.

Half of the project would be set aside for bikes, while the other half would be developed for commercial purposes. Scheel's design is intended to replace an existing parking lot at a centralized location in Philadelphia, with easy access to the business district and public transporation, and features four levels of storage for 690 bikes (compared to 100 cars on the same area) and support services like a bike shop, restaurant, courtyard, showers, meeting rooms, bike sharing and bike rental for tourists. In the future, the concept could also expand to other parking lots in the city.

The multi-story bike parking is visible from the street and is a screen to the central courtyard, with a L-shaped building in the rear that would house offices, restaurant and bike shops. The central courtyard is a great idea to help bring in natural daylight, in contrast to the dim atmospheres of regular car parking facilities.

I am delighted to see urban concepts like BIKE gaining acceptance - hopefully other cities will similarly go in the right direction - whether it's more bike lanes, raising cycling awareness or city bike-sharing programs.

Check out the other finalists at the link below and see some more very interesting concepts for this same space.
Delaware Valley Green Building Council 2010 Sustainable Design Competition
Newer Post Older Post Home