This morning was the Ride to Work Day for the City of Orlando, and a group of coworkers and friends met up and bike bussed to Infusion Tea to meet the Mayor and the group. Mayor Buddy Dyer spoke to the 150-200 assembled cyclists and spoke of the upcoming bike improvements that the city is working on. He mentioned the agenda to increase the number of miles of bike lanes and to work on implementing some of the initiatives in the Complete Streets program that the city passed. 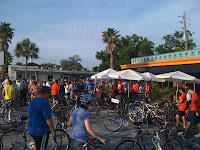 After a few photos and hand shakes, the Mayor and the group headed from College Park to City Hall. We had a full police detail to cork intersections and guide us conflict free down the road. It basically was just like a Critical Mass ride, but this time we had the police on our side. 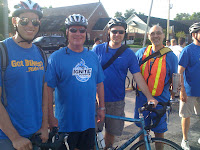 Finally, we made it to City Hall and the Mayor did another brief speech and everyone hung out for more pictures and freebies. Overall it was a successful event and there were probably about 50 more riders than there was last year. The "ride to work" effort in Orlando hasn't been that impressive. I haven't noticed very many new riders on the road this week and the new riders I saw today were all people that attended the morning ride with the Mayor. People still have the misconception that riding a bike is uncomfortable, dangerous, and foolish. They can still think that while I save money from no car payment or bills that come from that (fuel, parking, maintenance, insurance, etc), increased health and fitness, and experience the peaceful type of commute that can only come from cycling. 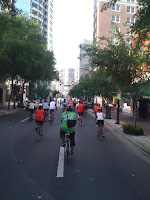 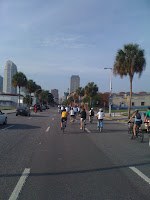