The zMotion cycling group (Zimmerman Advertising team) have used their advertising talents to put together a nice advocacy campaign that includes the TV commercial and pamphlet below.

Ride Right, Drive Right” is zMotion’s campaign to educate both motorists and cyclists about the need to share the roadways. The campaign’s goal is to make the roads safer and to save lives by building awareness. At the center of the campaign is the belief that cycling laws are poorly communicated. Many motorists are simply unaware of these laws, which render them ineffective. By educating both the cyclist and motorist alike, “Ride Right, Drive Right” can initiative a positive change.

“Ride Right” refers to the cyclist’s credo to know and obey all traffic laws; be courteous to other cyclists; never challenge a confrontational motorist; and to share the road. “Drive Right” reminds motorists to know laws as they relate to cyclists, including giving at least three feet of clearance when passing a cyclist, looking for cyclists when entering and exiting the road, and remembering that cyclists could be in their blind spots. 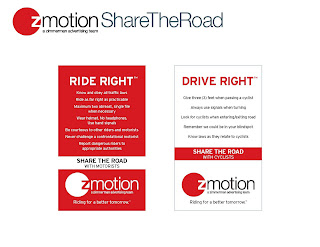