I had been seeing the road department's pavement equipment down on Ferncreek all last week, but I didn't even think about them repaving the whole street and striping in new bike lanes! I happened to ride that way on Sunday and saw the new asphalt and bike lanes, so I rode on it on my commutes today. It was pretty awesome. 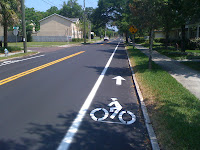 I used to ride that road everyday when I lived on that side of Colonialtown, but I was happy to have my new route on Hampton when we moved into our house. The old Ferncreek was full of potholes and was so wide that cars tried to fly past you. Now with the narrower lanes, the cars are driving a lot slower and the new pavement resolved the pothole situation.

The other plus is the new striping at the Ferncreek-Colonial intersection. That was another location where the cars would try to make it around you by using the center left turn lane, but now the striping allows the cyclists to take the lane and the cars seem to queue up behind and wait patiently to let you get into the bike lane before they start passing. It is another study that shows that a little white paint has a ton of power to keep cars off your tail.
Newer Post Older Post Home