Gainesville is Livin In The Bike Lane 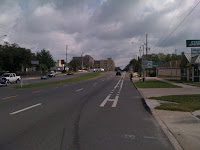 Yesterday I had the pleasure to head up to Gainesville to teach a Saturday course at the University of Florida and it is amazing how much the university and city has changed since I was last there in '09. The real pleasure came from seeing all of the new bike facilities that they have introduced. 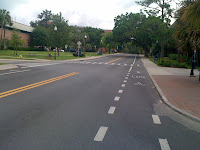 The most noticeable change was on SW and NW 13th St. The city took the old bike lanes and when they re-striped the road, they added a 2-3' striped buffer between the cyclists and the cars. They also widened the lane to at least 6' and added several bike route signage. This route is a main thoroughfare in and out of the city on its North-South axis and is where many road cyclists train and ride toward Micanopy and Ocala. 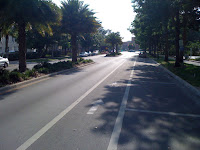 Almost all of the other streets that we drove on seemed to have added 5' bike lanes when they re-striped the roads and narrowed up the travel lanes to gain the extra distance that they needed.  The city added roundabouts at intersections of roads that were labeled as bike routes, to keep the flow of cyclists continuous and reduce the amount of stop and go movements. The city also added planted medians to some of their center turn lanes, to create a boulevard type feeling as you ride down the street. The campus itself still has bike lanes on every street and is building its bike culture to be prominent enough to place Gainesville as one of the top 50 biking cities in the US. 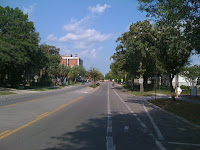 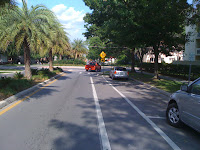 Another interesting change that I haven't seen in too many places, was the addition of a large sign at the city limits, that listed their current safety record for pedestrians and cyclists. It was reminiscent of factories or industrial areas that place a sign or billboard that states how many days it has been since an accident. It definitely made drivers think about pedestrians and cyclists being on the roads and at intersections and was a good way to draw attention to how safe Gainseville's streets are for biking and walking.
Newer Post Older Post Home