While I like bike lanes when they are done well, a mandatory "Ride in the Bike Lane" bill does not help cyclists and is a barrier in getting all types of riders out on bikes. 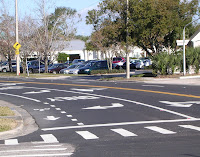 HB 971 Bad for Bicyclists and Pedestrians
Unbeknownst to Florida Bicycle Association, a mandatory bike lane use provision was included in the Highway Safety & Motor Vehicles bill.  The bill also allows local governments to permit mopeds, golf-carts and other motorized vehicles on sidewalks and trails.
Call Governor Crist as soon as you can to ask him to veto this bill. Executive Office of the Governor Switchboard: (850) 488-7146
If you're on Facebook, post the link to this blog post to spread the word!
Why it's bad for bicyclists:
Motorists who learn of the bill will have one more very strong excuse to harass cyclists who "aren't in the bike lane." There are many striped-off areas of roadways that are not really bike lanes, but some believe they are. They will also likely be ignorant of all the exceptions to the law (because they'll hear it second hand) and even if they read it in full, they won't understand many of the good reasons cyclists need to leave bike lanes.
Visit the FBA blog or CommuteOrlando.com to view a photo of how a bicyclist outside a bike lane is put in a defensive position and must prove his or her innocence. Many bike lanes are substandard in width, force cyclists into door zones, or are improperly placed to the right of right-turn-only lanes, but many officers don't understand these problems.
Motorists get another new excuse when they hit a cyclist: "He left the bike lane."
Why it's bad for pedestrians:
It's bad enough that pedestrians have to suffer parked cars blocking sidewalks, being blasted by sprinklers, sidewalk bicyclists who don't announce themselves when passing, and thousands of other nuisances, now they'll have to share stretches of sidewalk in some jurisdictions with motorized vehicles.  Local governments will be able to permit mopeds, golf-carts, motorized scooters and other vehicles which don't belong on sidewalks and on "bike paths."  The law limits such vehicles to 15 mph, but how will that be enforced?
Currently on the books: 316.1995  Driving upon sidewalk or bicycle path.--No person shall drive any vehicle other than by human power upon a bicycle path, sidewalk, or sidewalk area, except upon a permanent or duly authorized temporary driveway. (page 10 of the combination Florida Bicycle/Pedestrian Law Enforcement Guide)
The bill also allows drivers who have had up to four DUIs to get their licenses back.  From a Jacksonville TV station:
JACKSONVILLE, Fla. - If you get four DUI's in Florida, you could lose your driving privileges. However, if passed, a bill would allow drivers with four DUI's to get their licenses back.
The driver would have to go through a program, which includes educational classes and installing a breathalyzer in his or her vehicle. The device is called Life Safer Interlock, and costs about $70 to install and about $80 a month to maintain.
It's time for Florida's bicyclists and pedestrians to send a strong message:
"We will not be marginalized."