The Netherlands is a country committed to sustainability, where nearly 30 percent of trips up to 5 miles in distance are made by bike. A strong bike policy is integral to Dutch sustainability measures. There are 1.1 bicycles per person in the Netherlands, resulting in less traffic, less pollution and a healthier population.
Through a multi-city initiative called “ThinkBike Workshops”, Dutch experts have been visiting Canada and the US this year to discuss possibilities for increased bicycle use. The ThinkBike Workshops brought together Dutch bike experts, local politicians, planners, advocates, engineers and business people to plan and discuss how North American cities can become more bike-friendly. 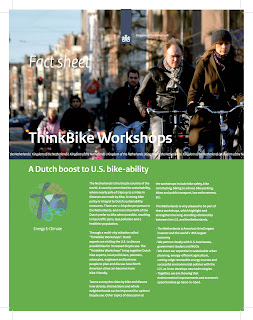 The Washington DC workshop just ended on Tuesday, and workshops in Toronto and Chicago were held in September. The teams surveyed the cities by bike and discussed how streets, intersections and whole neighborhoods can be improved for optimal bicycle use. Other topics of discussion at the workshops included bike safety, bike commuting, biking to school, bike parking, bikes and public transport, law enforcement, etc. They give specific recommendations for specific intersections and corridors, guided by principles of continuity and bi-directionality. In DC, their suggestions included two-way cycle tracks (even on one-way streets) with buffers separating them from traffic, expanding public plaza areas, installing bike signals, bike-only connections where roads cut off, sharper turns at intersections, colored bike lanes and more.

What if our streets were as bike-friendly as theirs? We could get there. Our trip patterns aren’t dramatically different from theirs: most trips in this country are under four miles, or 20 minutes by bike. But here, people drive those short distances. What would it take to get more of us to go by bike?


As Cor van der Klaauw, a Dutch cycling planner, said, “I think most of the bikers from Holland, when they will cycle in your country, will think, ‘well, there are no facilities.’” But he also said he found some impressive bike innovations in DC – “We learned a few things which we can take back to Holland.”

On a national scale, there are things we can do to boost bike ridership. They’re not necessarily as sexy as cycle tracks but the Dutch visitors say they make a difference. They are all things that we know, and we can only dream of them actually being implemented. We make it too cheap to drive, getting a driver’s license is cheap, gas is cheap, parking is cheap, excise taxes on car purchases are cheap, etc. Plus, we get our kids started off wrong by driving them to school every day. The Dutch planners commented that the U.S. doesn’t invest enough in school buses, and our streets often aren’t safe enough for kids to bike to school. In the Netherlands, 50 percent of trips to school are made by bicycle.

Rep. Tom Petri (R-WI), a co-chair of the Congressional Bike Caucus, told DC workshop attendees, “We are engaged in a bipartisan war against couch potatoes here in the United States. I think it’s been won for some considerable time, for a variety of reasons, in the Netherlands.”

Below are some PDFs that detail the innovations in Netherlands' cycling infrastructure.