One of the perks with working at an international company, is the vast number of projects that can send you across the globe. These kind of travel trips also create layovers in foreign cities for sometimes a day or so. Some recent such trips created stops in Paris France and Hamburg Germany for a few of my coworkers. Below is a recap from what they saw in Paris and the Hamburg post is in the works. 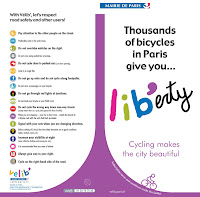 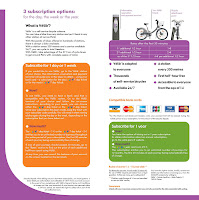 Few bicycling systems in the world have attracted more attention than the Paris’ Vélib, launched in 2007. With over 17,000 bicycles in circulation and a surprising degree of both permanent and provisional infrastructure, the Vélib is the crown jewel of European bicycle share systems, and has jump started a transportation revolution in this city of lights. But as fantastic and unprecedented as the Vélib may indeed be, the system is troubled by a number of distribution problems, and lacks the necessary scope of integral planning and infrastructure to make not only the Vélib, but bicycling in general a boundless success in Paris.

The Vélib’s greatest success, and the baseline measure for any bicycle share system, is that it achieves critical mass. Quite simply, the bikes are everywhere. Stations appear every couple of blocks and often stock far more bikes than one might expect. Vélib’s system of 17,000+ bicycles and 1,200+ stations makes finding a bike, returning a bike, and enjoying a bike easy and carefree. Or at least, it ought to. 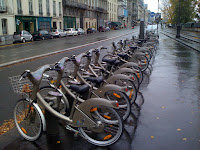 The Vélib, it seems, represents a strange case of success breeding mediocrity. Because such a critical mass of bicycles are in circulation and people actually use them to get around for short trips and errands, the system is plagued by a number of unprecedented problems. First of all, there is the inflow/outflow dilemma. During the day, there are a lack of bicycles in the perimeter districts (especially hilly areas) and an overabundance of them in the center- which makes parking a stressful and inconvenient affair. Since the Vélib is only free for the first 30 minutes, if you happen to arrive at your intended destination to find your station and the nearest one totally full, the result can be frustrating. True success could only be achieved if people in both the center and the periphery used the Vélib for all trips, long and short, constantly, or if bicycle redistribution were carried out so thoroughly that the the system could maintain its equilibrium- unlikely, though thought-provoking possibility. Secondly, as anyone who spends five minutes in Paris realizes rather quickly, walking is a great deal more pleasant than cycling in Paris, to take in the streets, smell, and architecture at a more relaxed pace.

What is in some ways more surprising than the Vélib, is the degree to which the city of Paris, has, within a relatively short span of time, established a tremendous amount of permanent and provisional cycling infrastructure. On-street painted bicycle lanes, asphalt-paved sidewalk lanes and separated, at-grade pathways make the frenzied center of Paris a more than adequate environment for bicycling.

As far as infrastructure goes, the city of Paris has employed several consistent strategies to accommodate cycling and make it a safer activity.

1. Permanent separated lanes - On several main boulevards and wider streets, Paris has built in permanent or provisional, separated cycle tracks. These are often paired with share stations at regular intervals and represent the crem-de-la-creme of the Vélib’s infrastructure.

2.  Painted lanes and logos - A mixed bag overall, the painted lanes with frequently stamped bicyclist logos in Paris reflect safe bicycling environments 50 percent of the time. Though frequent on street painted signage and lanes are a constant reassurance to traffic-dodging cyclists.

3. The Bike/Bus Lane - Nowhere more than Paris have I seen the bike/bus lane strategy employed. Basically, the city creates a dedicated bus lane (sometimes even in the center of the street, and often accessible to delivery vehicles as well) and stamps a cyclist logo onto it. The idea being, that in the process of facilitating public transport, the city also creates a safe, luxurious, and spacious route for cyclists. In reality, however, the city takes bicyclists out of the piranha tank and puts them in with the sharks. They are a less populous breed, but interactions can be daunting, uncomfortable, and potentially dangerous. In general, I find that these bike/bus lanes could benefit from a separate bicycle lane within the larger dedicated area in order to ease the potential space crunch and delineate space in the event of conflict.

4. The local/slow street - A more successful street prototype used in Paris is the local or calmed/slow street which is accessible to both cars and bicycles, but is separated from fast traffic.  These streets effectively separate bicyclists from heavy traffic and ease traffic by giving cars looking for parking a separate and comfortable space to do so. This concept is a familiar one used quite frequently in the Netherlands and helps to create a calmer space for bicycles, as well as a buffer between pedestrian sidewalks and heavy traffic.

4. Intersections - Where the bicycling infrastructure of Paris, and most other systems for that matter, falters is at intersections. Some would argue that an intersection in a cycling system serves the same purpose as a joint in the human body. Without the adequate articulation of these key pivot points, the skeleton loses its potential for connectivity and flexibility. Where cars, bicyclists and pedestrians come together and conflict, "That is the network." As much as Paris has succeeded in reassuring bicyclists of their place on the road and as part of the traffic hierarchy of the city, at its intersections (for bicyclists and pedestrians alike), the system fractures.
Though Paris has employed a number of interesting solutions in the realm of infrastructure, including checkered green painting at troublesome intersections, left and right turns remain treacherous and, at many junctions, bicyclists struggle to fend for themselves and must be quite aggressive. Of course, there is hardly a case for comparison between Paris and Amsterdam or Copenhagen in terms of urban scale, but the city needs to bolster their infrastructure at these busy intersections and roundabouts-with signals, signage, and color- to make the Vélib a safe as well as successful system. 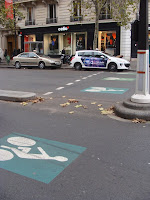 3. Wayfinding in a city built for parades

Paris, like many grand European capitals, is a city built for parades, not people or traffic. This famous urban form, an amalgam of axial boulevards that meet at oversized roundabouts crowned by statuary and  pilfered obelisks, makes traffic planning and the creation of a better bicycling infrastructure a tremendous challenge. Unlike gridded cities in the United States or student cities of the Netherlands and Germany, the challenge for a capital on the scale of London, Paris, or Berlin is not only to create a more livable city for bicycles and pedestrians alike, but also to use these systems in order to enhance wayfinding/legibility and to clarify the city’s districts, main paths, edges, and nodes.

Bicycle signage has the potential to convey not only hierarchy and direction, but also structure. One critique of the Vélib, is that although the bicycle stations are generally paired to Metro Stations, there is no Vélib sign to indicate when a metro station actually has one nearby, where to find it from the station, or even a small V sign beneath the prominent and recognizable M. Additionally, though the ubiquitous green of the bicycle paths and logos in Paris is appropriately suggestive and easy to recognize, I would be interested to see whether or not the system could be more effectively paired with the metro line numbers, destination names, and colors, or have their own system cues involving colors, letters, numbers, and pictures. Since certain streets already have Vélib stations at regular intervals, why not give such streets a distinctive accent, so that those looking for parking know that such a path is a reliable Vélib parking route.

Part of the issue of a Vélib-type system is that unlike a subway, it allows users to move freely in all directions. As any Google map of Vélib stations will show, the system is the ultimate instrument of spontaneity and appropriately ascribes the situationist doctrine of derivé. But as much as this kind of freedom liberates, it also brings with it a strange, unknowable opacity that fails to suitably discern or guide not only how people bicycle through the city, but what might be the safest and least complex thoroughfares for them to use. After all, the Vélib offers a thirty minute ride, so in general, it is built for riders with a purpose.


The Vélib in Paris offers a sterling example of how a bicycle sharing system can change not only the perception of bicycling in a city, but also how bicyclists can move through and interact with an urban environment. As much as the Vélib should be emulated in capitals all over the world, the realities of bicycle sharing are limiting. In an ideal bicycling culture and environment, such as Amsterdam or Copenhagen, bicycle usage is widespread enough to render a share system redundant, relatively unnecessary or geared to tourists. As much as the Vélib has been successful, the regular Parisian bicyclist, whose pride for his/her old Peugeot is long-standing and mature, has hardly been afforded with more consistent parking at metro stations compared with the flashy Vélib. Bicycle sharing must in certain cases represent a transitional state that increases bicycling in the public imagination and encourages people to experiment with bicycle errands and commuting. Sharing concepts in general must also generate the interest of more niche markets and, as they are already, encompass a wider and more flexible range of vehicle types, including cars, mopeds, electric bicycles, segways, and cargo bikes.

As a final note, it must be mentioned that the Vélib, while successful and popular among the Parisian bourgeoisie, is not as widely accessible to the poor and immigrant classes, many of whom may not use a credit card, or may have never learned to ride a bicycle. This impedes the system from fully achieving its democratic aims and restricts user ship to a less-than representative cross-section of the Parisian population. Vandalism and theft, moreover, some arguably in reaction to these inequities, are all too common.
Newer Post Older Post Home