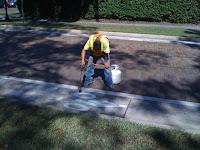 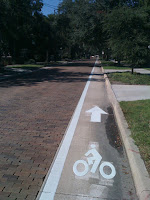 A few months ago I posted about the new stripes that were put down as an experiment on Livingston, here in Orlando, in my post Power of Paint.

This is one of the main routes on my daily commute, and it has some interesting issues/conditions. The entire streets is considered a bike route/lane and most of the way is asphalt with 5' bike lanes painted on them. For about .5 mile through one of the historic districts in the city, the street surface is the original brick pavers. The city constructed a 4' concrete gutter curb through this section and had signed it as the bike lane, but hadn't put a stripe along its edge.

This seemed to result in cars driving in the concrete gutter to give them a "half smooth" drive. For cyclists this created conflicts when cars would pass around riders to get back into the gutter, queue up in the lane at stop lights, and create a feeling of worry that drivers would see you and cause a crash from behind. 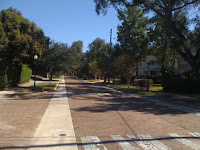 Last week the city repainted the experimental stripes and finished out the stripes along the entire brick section of the street. In the few days that the paint has been down, I have already noticed that cars have started respecting the lane and driving out of the concrete gutter. It honestly seems like the drivers had no idea that the gutter was the bike lane until now. Either way, I am happy that the paint has been implemented, and I applaud the city for finishing this important east-west connection through the city.
Newer Post Older Post Home