San Francisco is Planning for a Bike Future 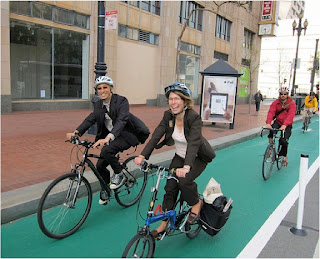 Bicycling in big U.S. cities has been on a major roll in recent years, from the explosion of next generation bicycle infrastructure (paths, lanes, trails, etc.) in New York, to the visionary planning in Portland that aims to make bicycling a comfortable, convenient and mainstream transportation choice for anyone who wants to ride.

San Francisco, which packs 815,000 residents in just 231 square miles (only Manhattan boasts a higher density in the U.S.), is joining its metropolitan peers with a bold plan that would triple bike use in the city during the next decade.

Despite a temporary legal injunction that prevented San Francisco from building any new bike facilities, bicycling in San Francisco increased 53% from 2006 to 2009. Now with the injunction behind it, the San Francisco Board of Supervisors unanimously approved a new transportation policy goal last week: 20% of all trips will be made by bike by 2020. Today, about 7% of all trips in the city are made on two wheels.

The goal is ambitious by design — an increase of that magnitude in such a short time will require significant investments in infrastructure and education campaigns — but the change in policy is a rational approach to a very challenging problem. The city is facing a saturated road network, a public transit system at full capacity and ever-shrinking transportation budgets; bicycling may be the most cost-effective solution for San Francisco’s leaders eager to find more ways to help people move from A to B in the near future.

Portland was able to triple the percentage of trips taken by bicycle by spending roughly $50 million on bicycling infrastructure. Although this sounds like a lot, it's actually less than the cost of one single mile of freeway. San Francisco is now ready to replicate this cost-effective investment.
Newer Post Older Post Home