While working in New York this past summer, I always noticed the window washers from my office window and thought, “who on earth would sign up for that job?” The reality was, the person washing the window was standing on a tethered platform, and had a second tether attached to themselves from the rooftop. There were three cantilevered arms over the building, two for the platform, and one for the worker. Though you do hear of deaths of plunging window washers, the reality is very rare, and considering the number of skyscrapers around the world and the amount of cleaning needed, the accident rate is extremely low. So why wouldn’t you or I choose this job? Quite simply, the perception of safety is so low that the idea of taking the responsibility is left to a small “fearless” minority. Would a major education campaign detailing the true safety of window washing, and citing the rarity of accident rates improve the number of window washers? Possibly, but by numbers so low as to be little worth the expenditure and effort. Some label the fear of bicycling in traffic as “Cyclist Inferiority Complex”, and tend to berate the population at large for having this wholly natural human vs. car concern.


In the 1960′s, the Netherlands and Denmark had developed their “car-first” infrastructure, and saw precipitous drops in bicycle modal share. By the 1970′s, efforts were made to focus on “people-first” planning, and to develop extensive bicycle infrastructure. This clip from Contested Streets details that switch, and shows areas in 1965 Copenhagen that look very much like Orlando now. The battle the planners faced was the assumption that “we’re not Italians, we’re Danes…we have no culture for walking”. Similarily, businesses fought the infrastructure tooth and nail, claiming traffic congestion and a drop in visibility. The reality is both cultures are now known as bicycle meccas. One would assume it’s always been that way when visiting, but according to planner, Jan Gehl, it’s only occurred within the last 30 years. Portland, Oregon would have never thought itself the bicycle capital of the US only 15 years ago, but the city’s massive redirection toward people first planning, changed the area in very short order.

Realizing the importance of the “perception of safety”, planners went to great lengths to make bicycling irresistable. Because of these major changes in Europe, statistics show massive increases in ridership for all age groups when compared to the US: 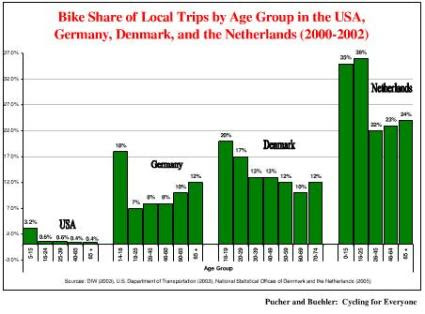 Women are more sensitive to safety than men, so separation of transit modes was a major push made by European planners to enhance the perception of safety. Because of this, Denmark and Germany have nearly 50/50 travel rates between men and women, and in the Netherlands, women actually exceed men in ridership:

This change in planning goes well beyond enhancing the “perception of safety”, and goes to great lengths to increase the overall safety by focusing on “people first” road calming. Soren Jensen’s study of cycle track installations showed increased ridership by 18-20%, and Peter Jacobsen’s study of safety increasing with the number of riders. What’s more telling is the fatality rates when compared to the US: 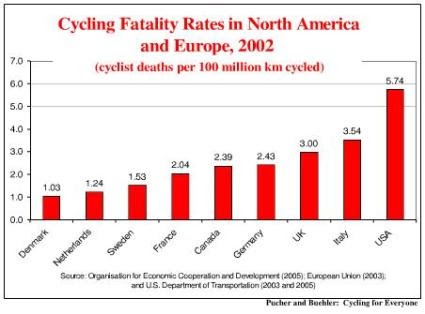 Between 2005 and 2007, bicycle trips in Amsterdam officially outpaced car trips. From 1990 to now, ridership has increased 36%. The only things changed infrastructure wise from then to now were increases in bicycle infrastructure and restrictions in parking measures. To see changes of that magnitude in the US, we’ll need to make similar adjustments to our road systems to place people over cars.
Newer Post Older Post Home