Consequences of the Mid-Term Elections On the Bike World 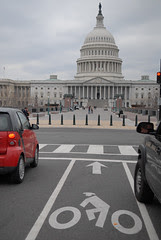 Given what happened Tuesday night, things are likely to fundamentally change for how bicycle advocates nationwide frame their arguments from here on out. But just what exactly does this all mean for bicycling? Leaders from several major bike advocacy groups have already stated what they thought and I think you'll be scared, surprised, and inspired by what they said. From taking a cue from the Tea Party, to a frank assessment of what could be a bumpy bikeway ahead, read their reactions below...

Kevin Mills, Vice President of Policy for the Rails to Trails Conservancy: 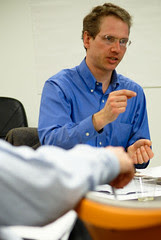 Will bicycling be impacted by the shift in power?

"Bicycling is not traditionally a partisan issue, so it’s unfortunate that there have been some occasions where bicycling has been used as an issue to divide rather than unite. However, we take heart in our support from across the political spectrum in communities across the country..."

Is the Transportation Enhancements program in jeopardy?
"The Bureau of National Affairs recently reported that Rep. Mica may take transportation funding ‘back to basics’ and that Transportation Enhancements may be among the programs cut. However, Mr. Mica has vocal constituents and political allies back home for whom trail systems and bicycling are high priorities. He has expressed support for trails and participated in ribbon cuttings on numerous occasions, and he supports robust transportation spending overall. If there is an attack, it is likely to stem from House leaders directing committee chairs to push for aggressive cuts in programs that they do not perceive as core federal functions.

On the role for bike advocates going forward:

"It is critical that bicycling advocates make the case for the cost-effectiveness and mainstream importance of federal active transportation investments. We need to convince decision-makers on both sides of the aisle that investment in bicycling and walking is more important in times of fiscal constraint, not less. That is why Rails-to-Trails Conservancy feels so strongly that AAA’s call for restricting the use of federal gas taxes for highways alone has to be challenged (see our petition). When money is tight, balanced transportation investments are more important than ever. Our past gains and future needs could be in jeopardy if we don’t convince decision-makers of this truth." 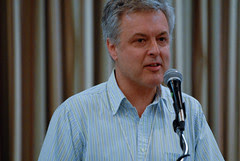 "I think emphasizing the cost effectiveness of government investments is going to be absolutely crucial. I think there's a perception among some elected officials that bicycling is an enhancement or an add-on, that it's a nice thing and you do it when budgets are flush and everything else is taken care of; but we know from experience - especially in Portland - that a small amount of money invested in bike infrastructure gives people a viable alternative to driving, saves cities on infrastructure construction cost, saves money on new parking construction and all the other benefits we stack up all the time.

What I've been hearing from the new majority is talk about any infrastructure investments being focused on building new lanes on highways. In some cases that makes sense... but we'll have to really sharpen our arguments about dollar invested/dollar returned. If this election was all about people saying 'we want smaller, more efficient government' than bicycling should be a higher priority.

The other thing is we have to be clearly more bike-partisan than ever. We've got to be very careful out of the gate not to be branded as a Democrat thing or a solution that's supported by just one party — if we did that we'd lose half the population out of the gate.
We have two choices now as a movement: One is to be discouraged and say the sky is falling, the other is to get back to work and get better, and that's what we're going to do." 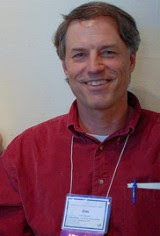 Jim Oberstar was a key champion for your U.S. Bike Route System project. What are your thoughts after his defeat?

"It's shocking. It's stunning really. In general it's a tremendous loss for America to not have Jim Oberstar working on transportation. He was a champion not just for us [bikes] but for a truly integrated transportation system. To not to have Oberstar's leadership on the US Bike Route System is a setback; but the project now has 27 states working on projects, which is far beyond anything we expected.

To some extent, the work we've all done has spread projects far and wide and has generated interest at state and local levels that I think will help move the bike movement forward. I think it's early to say what impact the elections will have... but I do think we have an incredible ecosystem of organizations and people that will help keep the bike movement going forward no matter who's in power in D.C."

What about working in a bi-partisan fashion?

"I hope we can bring both parties around on this issue. There's got to be some incentive for both Republicans and Democrats to have an issue they can work together on, an issue they can work on where they haven't already had harsh words. Bicycling and transportation could be one of them. You have all these groups - the Chamber of Commerce, labor, transit, and so on, all saying we need a long term investment plan for transportation, so it seems there's more pressure to act here than in other areas. How that plays out for biking, who knows."

Andy Clarke, President of the League of American Bicyclists 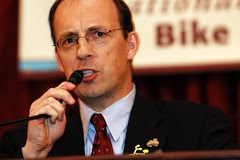 "We are going to be playing a lot of defense in the months ahead and – not to push the analogy too far – we lost a star player in yesterday’s elections: Congressman Jim Oberstar.

The bicycling movement has to hone our message, get back to basics, and start working with a lot of new members of Congress to make sure they know about our issues. Thanks to our successes over the past several years we have a lot more to lose now… so it’s going to be more important than ever for folks to show up in Washington at the National Bike Summit in March and to meet with their elected representatives at home to make the case for continuing the Federal investment sustainable, livable, healthy communities. Bicycle-friendly communities." 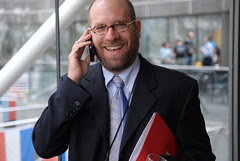 On the loss of House control:

"There's going to be a lot of fears with Oberstar's departure. There will be a little battle over positions, but locally we might gain as DeFazio could gain stature in the Transportation and Infrastructure Committee and become the ranking minority member.

The biggest concern with House shift is the Republicans have almost across the board taken a pledge to not fund projects through earmarks. While earmark funding on surface appears to be a poor way of managing a democracy, our projects, particularly trail projects have historically done very well through earmarks.
In order for us to convert to a transportation policy truly abased on merit, we need a reform of the transportation bill, and with a split congress it will be difficult to get reform inside that bill (like a complete streets policy for example). We may not do as well in project funding in the future.

On other hand, we had two years to build a great transportation bill and we didn't get that done either... so maybe sitting down around a table trying to build consensus with two parties is what it's going to take to get incremental changes now that will help build for the future."

So, why do you think we didn't get that done?

"I think one thing we saw last night was a lack of vision. If you look at what's going on right now, there's a lot of vision coming from the White House and the DOT. Some Democrats embraced that, but as a party, maybe this will get them to embrace a real vision of hope and livability and not be afraid to run on that campaign.

One thing the Tea Party movement shows us is that yes, fear and loathing can trump hope and vision, but it also shows that people with very little experience - and in some cases very little money - can build a campaign and win. The lesson we can take from this is we need to find our own candidates. We need to show up at town halls and be just as angry and loud, but instead of being loud about fear, we need to be loud about traffic justice, street design, connectivity...

Some important takeaways from some very smart people.

There's a lot of great reporting about what the election means for national transportation policy. Two of the best I've come across are from Streetsblog and from The Transport Politic.
Newer Post Older Post Home