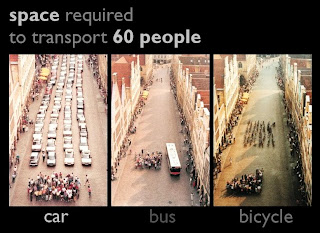 Going from DC to Orlando, a few things were blatantly obvious. Both cities have major automobile traffic problems with major congestion, but one invests in bicycle facility improvements and the other doesn't.

I was sent this image by a fellow rider, and it sums up how cycling is one of the solutions to automobile congestion. The more people on bikes, means fewer people in cars. Our nation's capital is fighting the problem by increasing the miles of bike lanes, separated trails/cycle tracks, bike racks, lockers, etc.

With more voices raising up for increased investment in bike facilities, I think Orlando can become like several of America's great cities, that are embracing cycling and investing in ways to increase ridership. Cities are starting to realize that they cannot sit back and just hope that people want to get on a bike and fight off traffic, but by creating safe routes for all types of users, they can get more people in the saddle and on the road!
Newer Post Older Post Home