Well I had my quarterly brush with an automobile on my commute home tonight. I was heading east on Livingston, coming up to the Mills intersection. The light was turning red and I stopped just before the cross walk, about 3' from the curb. As you can see from the photos, this stretch of road is interesting because the bike lane disappears and the cars freak out and typically don't know what to do around the bikes that get tossed out into their lanes. 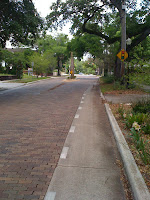 Well, as I am sitting in the lane, a minivan behind me moves up and around my left side, and pulls in front of me to make a right turn. It happened so fast that all I could do is yell "Hey!" and give them a tap in their side window (yes that is how close they brushed along side me). The female driver actually stopped suddenly and rolled her window down and exclaimed that she didn't see me. I just said, "You had to pull around me to get to where you are." She replied, "I thought you were going to get on the sidewalk and not stay in the road." I told her that it was OK, and that she should watch out for bikes next time.Luckily all of this happened during the red light and we could talk it out. 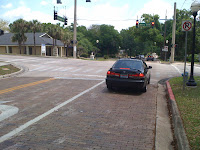 My designer hat made me think of several solutions to this type of situation. Extending the bike lane to the intersection is one. The other is to add a bike box to the edge of the crosswalk (see graphic below), so that cyclists can queue up and the cars would be warned that bikes would be in front of them and right turns on red would be prohibited. Just a thought. Seems way too simple of a fix, but it works everywhere else that they implement it. 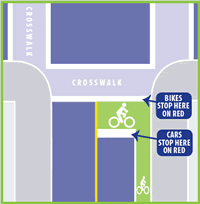