Another Piece of the Pie

Today was another beautiful day in the "Sunshine State". The morning Lakemont Ride was good and fast. The B group caught the A group at about mile 4, because they hit several lights that we missed. That just meant that our group grew to about 125-140 riders and then our average speed was increased to 23! The pack broke up into a few smaller groups, but I stayed with the lead pack and finished strong. 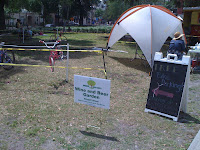 It was a good hard morning ride and after getting home and giving the old bike a much needed washing, we decided to head downtown for lunch and the Earth Day celebration at Lake Eola. It was really cool to see all of the eco-friendly products and services that were being advertised and sold. Rusted Chain was there to provide bike valet, so it was good that they were promoting their group and to see all of the bikes there.

When we left the park, we went to get some yogurt at Mochee, at The Plaza on Orange Avenue. We rolled around looking for bike racks for about 5 minutes, and finally got a security guard to point us to a rack down in the entrance to their parking garage. The little bike rack could only hold 4-5 bikes and was in an unlit corner, Needless to say we didn't park there and just rolled them inside the restaurant and leaned them against the wall. 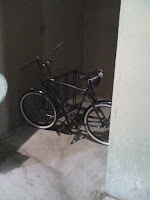 I haven't ever paid much attention to the lack of bicycle racks in the downtown area, but it is really shameful. My office is on Orange Avenue, but we have 3 bike racks inside our office and a locker room with showers, and I know of a few other offices, apartments, and condos that have similar bike rooms or bike lockers. The Plaza is a huge condo building with a movie theater and several restaurants inside it, in addition to the other bars and restaurants that are in the immediate area, and yet they only accommodated 5 bikes! That is a big issue.

For a city to increase bike ridership, it has to not only provide comfortable routes, but also provide places to park bikes where they won't get stolen or damaged. Orlando has no problem building parking garages for automobiles, but until they put some more effort into creating places for bike parking, we will still have low ridership, no matter what other facilities or plans they implement.
Newer Post Older Post Home