New Design for Bike Racks on the Sides of Buildings

Bike parking in most big cities is a tough battle for available, usable space. There's never enough of it for the simple reason that parking (especially the good kind, like sheds) hogs precious real estate that dense regions either don't have or can't afford to cede. One architect's solution: Stash bikes in something cities have in abundance -- the air.

Bike Hanger is a proposal by New York-based Manifesto Architecture to hang bikes clear off the side of buildings. A ferris wheel-esque frame latches onto to under-used facades -- the back of apartment towers, underpasses, etc. -- and works like a human-powered conveyor belt. Pedaling on a stationary bike nearby powers the wheel, forcing it to rotate. Cyclists then hoist their bike up on a T-shaped rack. When they're ready to take it down, they (or a bike-rack assistant, it's not clear who'd do the work here) would cycle away on the stationary to return their bike to the ground. In short, it's the two-wheel equivalent of stack parking, only greener; the architects say it wouldn't require any extra mechanical juice. 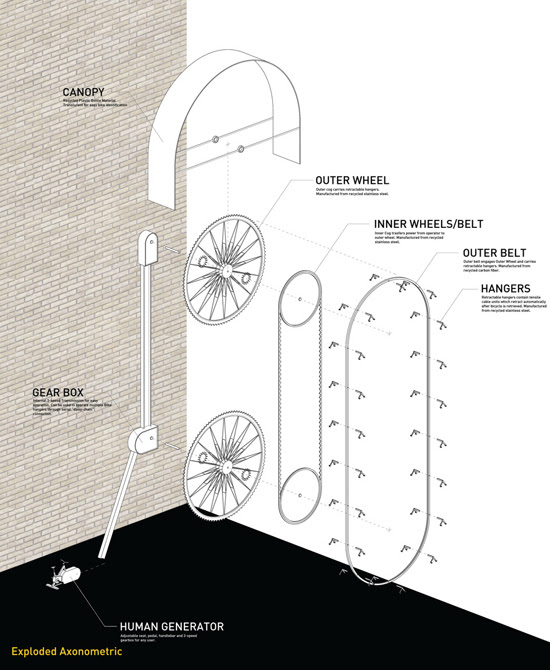 Manifesto Architecture came up with the concept explicitly for Seoul (a city that's almost twice as dense as New York!) though clearly, it'd work in any big metropolitan area where bike parking is in short supply.
Mind you, there are details to hammer out. For one, Bike Hanger would need some killer locking mechanisms, otherwise it's a just a thefts' paradise. Secondly, the wheel holds only 20 to 36 bikes. As a comparison: Many of the bike lockers in the San Francisco Bay Area can hold 100 sets of wheels or more.

So it's a lot of work for not a lot of storage. But when you think about all the weird, interstitial areas of a city, it starts to make sense. If the big push is to put more bikes on the street, then it's only logical to work with the character of the city you've got.