Beauty and the Bike Project 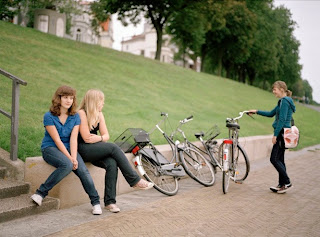 Beauty and the Bike is a project established by Darlington Media Group in 2008, to explore more deeply the reasons why girls stop cycling in the UK. They began with a small group of teenagers and young women in the northern English town of Darlington, most of whom did not cycle on a regular basis. They told them why - cycling is not cool, friends don’t cycle, it isn’t safe, and not very pleasant. The lack of cool had a lot to do with the image of the lycra and helmet clad nerd, so dear to the risk assessment world of official UK cycling promotion.

The Darlington Media Group then put them in touch with a similar group of girls in Bremen, Germany, where most young women cycle, another image presented itself - relaxed cycling on dutch bikes, dressed in whatever you want. So they decided to raise funds to buy some dutch bikes, the sort that were, and still are, unavailable in local bike shops. The girls were wowed by the style and ease, and together began to establish what for Darlington was a cycling avant garde.

Then a number of them visited Bremen. For the first time in their lives, they found an urban environment designed with cycling in mind. Cycle routes were direct, traffic free, quick and pleasant. Car drivers were considerate and drove at appropriately low speeds in shared streets, and gave way to cyclists on cycle paths.

Back in Darlington, when the girls from Bremen  came to visit, they were shocked at the lack of quality infrastructure, how much road space was allocated to motorised traffic, and how aggressively motorists used “their” space.

Throughout the project, Darlington Media Group followed the girls from Darlington and  Bremen, filming and photographing their experiences. The result is a book and DVD that can now be bought online from this website. Buy them and use them to help campaign for a more cycling-friendly urban environment. Check out the trailer below to see a good taste of the DVD and gets the point across.