The Greatest Encourager of Cycling-Peak Oil 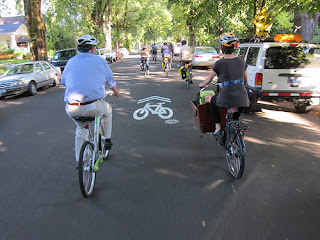 Most of the time I write about bike facilities, cycling education, safety programs, and interesting things that are happening with bikes in cities across our country and the world. I just read a great interview in Spacing with economist Jeff Rubin, and forgot that I hardly ever discuss what really drives increased ridership - costs related to driving motor vehicles.

In the article Jeff Rubin talks about peak oil, energy prices, urban planning and city building, and cycling. In particular, why so many people cycle in Copenhagen. If you follow my blog, or read many cycling blogs that talk about Copenhagen, you would think that the infrastructure that is there is what makes people want to bike. Actually the automobile policies there, are what drives people to bike, and the infrastructure is a necessity to hold the capacity of the numerous cyclists.

In Copenhagen, every major street has bike lanes. But why do people in Copenhagen ride bikes? I originally thought it was because they are physically active or environmentally conscious people. I then inquired about how much it costs to buy a car. It turns out that in Denmark you pay a surcharge which, depending on horsepower, can be anywhere from 50% to 150% of a car's sticker price.

It shows that government-levied taxes on car ownership and higher oil/gasoline prices can be huge factors in getting people on bikes. In Copenhagen, you can pay upwards of three times the amount for a car as in North America. If you want to see more bikes on American roads then wait until oil prices make it that much more expensive to own a car.

Rubin talks about peak oil and how it doesn't have anything to do with us running out of oil, but rather it becoming too expensive for us to feasibly use it for fuel.

For me, it doesn’t mean the world is running out of oil in some absolute geological sense. For example, there's over 170 billion barrels of the stuff in the Alberta Tar Sands. The real question is can we afford to burn it? We’ve exhausted our supply of easy-access, conventional oil and now we’re turning to unconventional sources in shale, tar sands, and deep water. It’s unconventional sources of oil and the prices required to facilitate extraction that are problematic for us. Therefore, to me, “Peak Oil” means the cost of extracting oil is gradually becoming greater than what our economies can tolerate. It’s going to take $150-200 per barrel oil prices to turn the Oil Sands into a 4-5 million barrel per day producer that would meet our needs. Those are simultaneously the kinds prices that when translated into pump prices take millions of people off the road.

As a bicycle commuter, I have seen the financial benefits of not driving a car and using a bike and public transit for transportation. I believe people respond in rational ways to prices and when they feel the financial benefits from going by bike, they won't want to stop. Triple-digit oil prices will show us how to respond and hopefully our politicians get it. The fact is that, in the future, more people will be taking public transit and less people will be driving. That change won’t be a result of any alleged “War on the Car.” The biggest war on the car is coming from $4/gallon fuel.
Newer Post Older Post Home