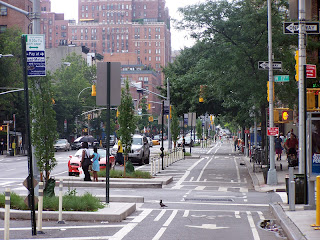 Just a few days ago I wrote about the Chicago's results of their bike count, and the success of their investments in infrastructure has proven to provide higher rates of ridership. With these successes, a new type of bike lane is being designed for Chicago to boost the confidence of cyclists that is safe to ride on streets without fear of being struck by vehicles.

The special lane is called a cycle track, and it's unlike the regular marked bicycle lanes that run next to vehicle traffic lanes and are separated only by paint on pavement. The key to a cycle track is a physical barricade, such as a construction Jersey barrier or a raised concrete planter box located to the left of the bikes-only lane. The curb or a sidewalk would exist to the right of the cycle track, and all motorized vehicles — whether moving or parked — would be on the left of the cycle track barricade.

The Chicago Department of Transportation received a $3.2 million federal grant to build and test a cycle track. A section of Stony Island Avenue, between 69th and 77th streets, was selected for the experiment.
The cycle track will be wider than a traditional 5-foot bike lane to provide space for whatever type of concrete barrier is chosen, officials said. The Stony Island cycle track would be the first in Chicago. Cycle tracks are becoming increasingly common in other bicycle-friendly cities as a tool to encourage more travel by bike and less car use, especially on shorter trips. 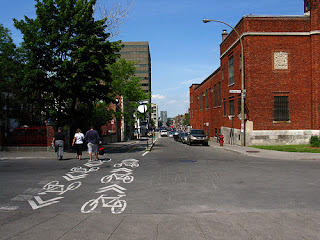 Studies have shown that the vast majority of people who bicycle restrict themselves to off-street bike trails because of fears about riding in traffic. Cycle tracks will open up the streets to more than die-hard urban bicyclists. The perception of traffic danger is the No. 1 reason people cite for not biking on streets. Cycle tracks have become popular among motorists too. Drivers say they don't have to worry about passing up bicyclists or getting tangled up with cyclists who weave from lane to lane and ignore traffic laws.

Stony Island was chosen for the test because it is four lanes in each direction on the roughly mile long stretch between 69th and 77th, providing ample right-of-way to build the bikeway without restricting traffic flow. The cycle count study showed that there is already a lot of bicycling on the route, and they envision the cycle track as being a good connection to Jackson Park, the lakefront and the larger bike network in the city.
Newer Post Older Post Home