Just yesterday I was reading and writing about the McGill University's action, to ban bicycles riding through their campus. Today on Copenhagenize, he highlights the video above. It's about the Universidad Nacional Autónoma de México (UNAM) and how bicycle friendly the university is. Typically Mexico isn't thought of as a leader in progressive bicycle infrastructure and culture, but this video definitely highlights their great work. 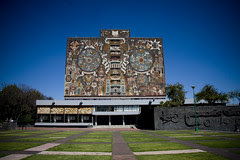 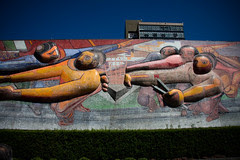 The main campus, is stunningly beautiful and is a World Heritage Site. The campus is largely car-free and as far back as 2004 they started a bike share program called BiciPuma. It has since grown and the university has wonderful bicycle infrastructure all over the campus.

The university's bicycle friendly policy and resulting infrastructure and facilities are the yardstick by which all other universities should measure themselves. Bicycles mix easily with pedestrians and the bike lanes have priority when running through car parking areas. It's all calm and relaxed.

McGill's anti-bicycle policy is an embarrassment. It's another example of rules being written by people who don't ride bicycles and who haven't bothered to do their research into the subject. Instead choosing to ban bicycles based on personal perception of danger and risk assessment. We're used to that in cities, but this is a university...

Universities should be the first bastions of bicycle culture, not just because they are places of learning that often (not always) set examples, but also because they tend to be unique, autonomous zones in the position to dictate traffic rules and policies.

Golf carts could be traded in for three-wheeler cargo bikes for maintenance people to get around, bicycles could be made available for staff use and students who choose to ride a bicycle should be encouraged, embraced, thanked profusely and welcomed at their place of study.
Newer Post Older Post Home