Chicago's Bike Improvements are Paying Off with Higher Ridership 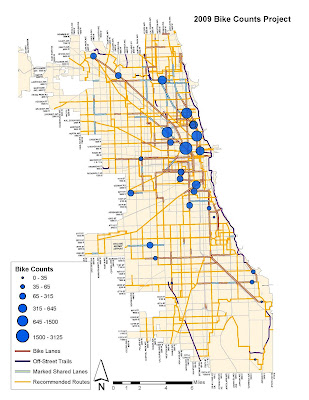 Thousands of bicyclists travel along Chicago streets each weekday, according to the results of a first-ever bike-count study conducted by the Chicago Department of Transportation (CDOT).

“This study confirms what we already knew: That bicycles are a popular and convenient way to travel in Chicago,” said CDOT Commissioner Bobby L. Ware.

The study, conducted in summer and fall of 2009, counted bicyclists at 26 locations throughout the city.  CDOT’s Bicycle Program staff used automated pneumatic tube counters designed to count bicycles, but not motorized vehicles.

Counts were taken for 24 hours on Tuesdays, Wednesdays and Thursdays in warmer-weather conditions.  Nineteen of the 26 locations have dedicated bike lanes; four have marked shared lanes; one location has a shared bus/bike lane; and two locations have no bike-related pavement markings.

CDOT compared the bike counts to existing vehicle counts at the same locations.  In many instances, the mode share—the percent of vehicles that are bicycles—was less than 2 percent.  But in a few cases the mode share was significantly higher:

Additionally, 17 of the 26 locations saw more than 200 bicyclists daily, with the highest count of more than 3,000 bicyclists recorded at 640 North Milwaukee Avenue.

The bike counts not only document the use of existing bike facilities, they will be used to plan future facilities, said Ben Gomberg, the CDOT Bicycle Program Coordinator.  The Bike 2015 Plan (www.bike2015plan.org), the master plan for bicycling in Chicago, lists gathering bike counts as a goal, noting that the counts will help the CDOT Bicycle Program gauge the effectiveness of Plan strategies.