Brazilian Driver Claiming Self Defense For Running Over 20 Cyclists 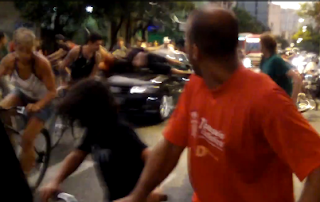 The driver of the car filmed plowing into a group of cyclists on a Critical Mass ride in Porto Alegre in southeast Brazil last Friday, acted in the self defense of himself and his 15 year old son, his lawyer told the Brazilian media today.

Ricardo José Neis, an official of the Brazilian central bank, handed himself in to the Porto Alegre police who have been looking for him since they recovered the car involved in the incident. The police identified Neis as the owner of the car on Friday night. Luis Fernando Coimbra Albino, the lawyer representing Neis, told the Zero Hora newspaper that his client had his 15 year old son in the car with him and felt threatened by what he alleges was aggressive behaviour by the cyclists who he says banged on the car roof. Neis feared that the cyclists would turn the car over.

"He felt cornered, he acted to protect his son who was in the car", said Albino.

Questioned as to how his client sought to refute the damning video evidence against him, Albino claimed that videos only show part of what happened:

"The images are powerful, but show only from a certain point, when he had started the confusion. They do not show the aggression that led him to flee"

Mr Albino may have his work cut out to make this defence stick all the films of the ride so far show a far from aggressive group of cyclists comprising many women, old people, children and even a lady with a dog on a trailer. Indeed, while the driver's alleged concern for the safety of his child is commendable any concern for the safety of children does not appear to extend to the children of others – a young boy can quite clearly be seen at 0:58 in the longer of the videos of the incident just feet from the front of the car as it is driven through the group of cyclists. Neis's concern doesn't extend to women either a number of whom he ran down in the incident. Far from being aggresive the cyclists in both films seem good humoured and don't appear to be holding up traffic to any great degree. There were also numerous witnesses to the incident both cyclists taking part in the ride and pedestrians watching it go by.

Indeed one witness had already come forward to say that he had seen the driver of the car acting aggressively towards the riders in front of him before he drove his car through them. Camilo Colling, told the Brazilian website Terra Brasil that he spoke to the driver just before the incident, asking him to be patient and stop behaving aggressively towards the riders in his path and warning him that there were children and older people taking part in the ride ahead. The driver allegedly replied,"Yes but I'm in a hurry", before ploughing his car into the group of cyclists in front of him.

Speaking to Zero Hora, Neis's son said that his father had driven through the cyclists after arguing with riders at the back of the group and feeling threatened. According to the lawyer the riders damaged the car smashing windows leading Neis to fear for the safety of himself and his son. You can see a picture of the car here and while it is undoubtedly damaged, that damage would seem more consistent with running down 20 cyclists than being attacked by them.

According to Albino, contact between himself and his client was mediated through Neis's ex-wife, and Neis has not surrendered to the police until now because of his emotional state. If he is proved to have acted with intent, Ricardo Neis may face charges of attempted murder.
Newer Post Older Post Home