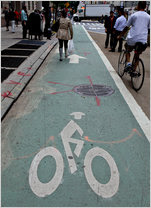 According to a poll released on Friday by Quinnipiac University,New York City’s new bicycle lanes, the subject of one of the more heated civic controversies in recent memory, are supported by a majority of New Yorkers.

More than half of registered voters — 54 percent — said they believed the expansion of bicycle lanes had been a positive development for the city. The only demographic groups opposed were Republican voters and, by a smaller margin, residents of Queens. Over all, 39 percent of respondents said they were unhappy with the lanes, and 6 percent said they had no opinion on the matter (or did not answer).

The survey question was fairly stark: either that the bike lanes are “a good thing because it’s greener and healthier for people to ride,” or “a bad thing because it leaves less room for cars, which increases traffic.” The poll asked which statement was closer to the respondent’s point of view. Support for the lanes was strongest in Brooklyn and Manhattan. Voters in Queens disapproved of the lanes, but by 48 to 45 percent. Only 35 percent of Republicans supported the lane, while 59 percent of Democrats approved.

Support for the bike lanes seemed to wane with age. Voters between ages 18 and 49 supported the lanes by wide margins, but support fell below 50 percent among voters older than 50. Still, supporters outnumbered opponents in each age group. The poll, which surveyed 1,115 registered voters earlier this month, had a margin of sampling error of plus or minus 3 percentage points.

Hundreds of new bicycle lanes have been installed since 2007, part of the administration’s plan to encourage environmentally friendly modes of transportation that cut down on traffic congestion. Arguments for and against the bike lanes typically go into more detail than the survey’s questions. The city’s Department of Transportation, led by its commissioner, Janette Sadik-Khan, argues that carving out street space for bicycles has resulted in slower car traffic and, in turn, fewer accidents.

Critics of the lanes complain about lost parking spots, additional difficulty in driving in the city, and the risk to pedestrians from bicyclists who disobey traffic laws. Some opponents have also faulted the Transportation Department for installing the lanes without sufficient community outreach, and not disclosing all the relevant data related to the lanes. Those are among the arguments in a lawsuit filed last week by a group of well-connected Brooklyn residents who have called on the city to remove a two-way bike lane along Prospect Park West.

Biking advocates cited Friday’s poll as evidence that the city should continue expanding its bicycle network.

“Whether they drive a car, ride a bike or get around by train, this poll shows that New Yorkers understand that bike lanes make our streets better for everyone,” Paul Steely White, executive director of Transportation Alternatives, wrote in a statement.