A few weeks ago I announced my intentions to survey the streets of Orlando to find the most efficient routes to get to and from Orlando's downtown. My team of friends and I  have had several survey rides and have seen lots of interesting conditions, and I want to update you on our progress.

As I mentioned on my initial post, we are riding only in the road/bike lanes or on posted bike trails. We are also maintaining speeds of 13mph to keep all of the rides consistent. Our main focus is to strictly document how long it takes to go certain routes, and how far we can get in a particular amount of time. 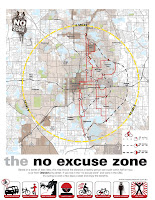 The attached graphic shows the time zones that are emerging from the completed rides. We still have a few more rides on the east side of town to make all of the connections accurate, but it is pretty obvious that once you make it out of the downtown core, you can ride fairly easily and go almost 6 miles in 30 minutes, from any direction.
Our steps from here are to continue to fill out this "zone" map for the east side of the city and then head west. We then want to look at several of the influential factors in the areas that we ride (population density, points of interest, existing conditions, etc.) and try to determine if there can be some modifications or enhancement to the current routes to make them more connected and efficient. We will also be looking at some of the alternate routes that some areas may use as options for recreational routes, and not just merely for commuting and getting from point A to B as fast as possible.
We are still making modifications to this graphic and are working to make it as legible as possible. I will keep you posted as this project progresses.