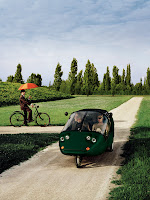 Have you ever seen or heard of a TWIKE? They were invented in 1986, but are mainly rolling around in Germany, Switzerland, and the Netherlands. They may not be new to you, but I hadn't seen any of these until a friend sent me a link to them. This is a perfect response to people when they complain about not riding a bike because of weather conditions or being worried about their appearance when they are commuting.

The TWIKE is an electric vehicle that is designed to carry two passengers and cargo. It can be driven in electric-only mode or electric + pedal power mode (pedaling extends the range of the vehicle but does not substantially add to the vehicle's top speed). The top speed of the TWIKE is 50-60 mph, and is steered with a joystick. The TWIKE is efficient, environmentally friendly, attractive and sportive.

The TWIKE isn't too cheap. The US price tag is $20K-$30K, but you can get several bells and whistles that make the TWIKE just as comfortable and stylish as any US car. There are only 25 in the states today, but since they are licensed as a motorcycle vehicle, they should increase in numbers as gas prices rise and people look for alternative ways to travel.