Biking Your Kids to School

Regionally here in Orlando, 15 percent of rush hour traffic is attributable to parents driving their kids to school. In 2001, only 16 percent of kids biked or walked to school as opposed to 42 percent in 1969, according to statistics from the Centers for Disease Control and Prevention. 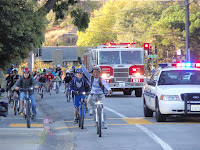 School is starting again and with it comes the question of how to get your children back and forth to school. Walking or biking to school has numerous benefits for your child and your family and can even help cut down on school traffic. With school starting back up, it is a prime time to direct focus on making routes to schools safer for children biking and walking to school. It also is time to train children how to properly ride a bicycle and what the rules of the road are.

Why shouldn’t you just drive them?
I’m sure you’re thinking that it is just so much easier to just hop in the car but there are a lot of benefits to having your kids bike or walk to school: 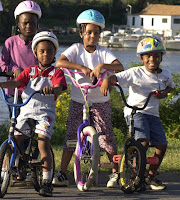 Other perks include that your kids will get a sense of direction and you’re more connected to your community. We say “good morning” to those we pass along the way to school such as the gentleman we see walking his dog most mornings, check out flowers, learn where his friends live, etc.

Okay, I’m convinced. Now what?
Planning a route will take the most time. The route you drive is not likely to be the same route you’ll ride. Use low-traffic residential streets. For children younger than 9-years-old, use sidewalks, side paths or bike paths. People are not accustomed to look for bicyclists and pedestrians on sidewalks, however, so you will have to watch out for cars backing out of drive ways without noticing you. Intersections where there are stop signs, traffic signals or crossing guards are preferred.

Once you have a route, practice it on a weekend or other day there is no school. Bring a snack. Ride there, play on the playground equipment and eat a snack and then ride home. Is the route safe? Can your child ride the whole distance? Maybe a tag-a-long hooked up to your bike will be a better option.

Don’t forget
You and your child will both need helmets and will need to make sure you are wearing the helmets correctly.
You’ll need a lock for your child’s bike. A combination lock might be best unless you have a spare key.

When the weather turns colder
If your son or daughter is pedaling, they will be generating heat and may not need as heavy of a coat. However, since riding is faster than walking, a wind resistant outer layer is best.

Some precautions
Since children are shorter, it is harder for them to see over cars, etc. and it is also harder for drivers to see them. They often cannot judge the speed of cars and may think that the driver will “look out for them” the same way a parent would.  Teach them to look left, right, and then left again before crossing the street and to only cross at intersections.

Do I have to ride with them?
Until about nine- or ten-years-old, most children will still need an adult to help them cross the street. Your school may already have a “walking school bus”  or “bike train” or you can work with your school to start one.