Bike Sharing Makes You Fit and Helps Save the Environment 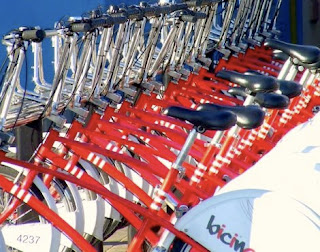 It's no longer big news when a European city gets a new bike share program, unless they do it bigger, better, or with a technical innovation that hasn't been seen before. It is newsworthy, however, that data is starting to trickle in - in this case, from Barcelona - indicating how beneficial bike sharing is to city residents. Just like regular city biking, bike sharing makes urban residents fitter and drops our greenhouse gas emissions, says a study published in the British Medical Journal. Those reduced greenhouse gas emissions and improvements to cyclist health far outweigh the risks from increased exposure to traffic and traffic's polluting byproducts.

Researchers compared a car's occupants tootling around Barcelona's beautiful paseos with a cyclist traversing the bike lanes on the highly successful Bicing bike share. (Bicing has increased cycle trips in Barcelona by 30%, where the average increase is about 3%.)

The results were given statistically: bike share users did have an increased mortality rate of 0.03 from crashes and of 0.13 from increased exposure to air pollution. The increase in physical activity from biking with the Bici bikes, however, resulted in 12.46 fewer deaths when compared with the car drivers.

In addition, Bicing has resulted in a reduction in annual carbon dioxide emissions in the region by 9 million kilograms. Which is about 1% of Barcelona's annual carbon emissions from all road vehicles.

The researchers used a health impact assessment to compare how car travel impacts city residents to how Bici travel does. They took their data pool from only regular Bicing users, and assumed that 90% of those had only started regular cycle commuting after Bicing came into being. The plus of this was that the study was able to measure differences more easily than if they had studied a group of regular commuter cyclists who simply joined Bicing when it started up instead of using their own bikes. The downside is that there's no way to know if that assumption is accurate.

The researchers also used Bicing's own data as far as length of trips and reasons for using the bike share - 68% of trips used for commuting to work or school and 37% combined with another mode of travel. The mean distance traveled by Bicing on a working day is 3.29 kilometers.

The researchers say that Bicing saves around 12.46 lives per year in the Barcelona population, and that this positive result is corroborated by two different studies - a Dutch study that showed the benefits of cycling "substantially" outweigh the risks in the Netherlands, and a 2009 study published in the Lancet that showed very real public health benefits in the UK and India by reducing emissions and encouraging active transportation.

Though the study's authors concede the study is limited by the "availability of data and the necessity to make assumptions to model likely scenarios," they carried out sensitivity analysis to assess the results, and also found that in all scenarios tested there was a net benefit (i.e. increased longevity) for Bicing users.
Newer Post Older Post Home