Getting Rid of Toronto Bike Lanes Makes No Sense 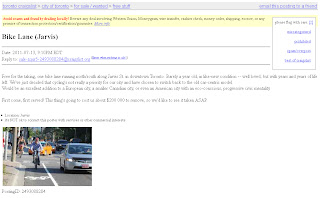 It's official; Toronto is tearing up its one year old Jarvis Street bike lanes and adding back a fifth driving lane. One Councillor said it's because a constituent complained I have 4 kids and I can't get home to them for dinner." Another said "more roads make cars go faster" which is just what cyclists need on Jarvis when there are no bike lanes.


During the debate about removing two suburban bike lanes, Councillor Michelle Berardinetti said "bike lanes are not a good fit for suburbs because we are forced to use our cars here" and "I never want to see bike lanes in Scarborough ever again." The mayor's brother, also a city councilor, says 'Atta girl, Michelle.' @Richard_Florida, who is living in Toronto for now, tweets: " TO debating taking out bike lanes, while other big cities are building separated lanes. How did it come to this."