New York City Mayor Michael Bloomberg has just announced that biking is up in New York City by 14% from last spring. The NYC Department of Transportation says it recorded 18,809 cyclists per day, up from 16,463 in spring 2010. The figures are being released directly by Mayor Bloomberg’s office, a gesture typically associated with claiming credit for “good news.” Word of increased cycling comes as the city is preparing to roll out an announcement of a vendor for its 10,000-bike bike share system.

And it comes on the same day that a Quinnipiac University poll shows support for bike lanes edging up from a 17 point margin to a 24 percent margin, or from 56 to 39 percent in May to 59 to 35 percent today.  In March, the margin of support was 54 to 39 percent.

Most of the increase in support comes in Brooklyn, home to a controversial lawsuit to remove a two-way protected bike lane next to Prospect Park.  In May, 56 percent of Brooklynites said bike lanes “were a good thing because it’s greener and healthier for people to ride their bicycle,” and 39 percent said bike lane are “a bad thing because [they] leave less room for cars which increases traffic. Now, according to Quinnipiac, that margin is 26 percent — or 60 to 34 percent.

Bike lanes are the least popular in Staten Island, the only one of New York City’s five boroughs where fewer people like bike lanes than like them, 38 to 53 percent. 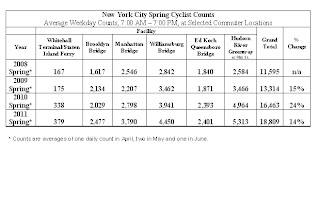 Other big city mayors, including Mayor Antonio Villaraigosa of Los Angeles and Chicago Mayor Rahm Emanuel, have said they want to expand their bike networks — by 40 miles a year in L.A. and 125 miles in Chicago by the end of Emanuel’s first term in office.

New York City counts cycling differently from other cities, which tend to rely on American Community Survey, or census data.  But that data only counts commuters who use say in a survey they cycle as their primary way of getting to work, not actual numbers of cyclists on the streets.

New York City began counting cyclists at six heavily biked locations in 1985, when 3,440 cyclists per day were recorded.  The locations are: the Manhattan sides of the Brooklyn Bridge, Ed Koch Queensboro Bridge, Manhattan Bridge and the Williamsburg Bridge; at the Whitehall Ferry Terminal and on the Hudson River Greenway at 50th Street.
Newer Post Older Post Home