One of my good friends and fellow cyclist, Steve, came up from Miami for the 4th of July weekend. He shared with me some great news from South Florida about the Rickenbacker Causeway, and he had some good things to say about riding conditions here in Orlando.

First the Orlando news. He and his girlfriend went out for a few training rides out they commented that the drivers here in Orlando were some of the nicest that they had ridden around. Every car that they encountered yielded to them, waved them through intersections, and even gave them friendly waves or honks. They said that most drivers in Miami are pretty rude and they had even experienced some drivers being aggressive toward them, just for being on bikes. Ir made me pretty proud of our city, for acting pollitely to my guests and toward cyclists.

The news from South Florida came from the community meeting in Coral Gables, about the Rickenbacker Causeway and the improvements that they are planning to improve cycling there. Below is the official update from the meeting. 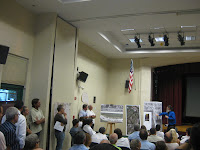 Excellent turnout at the community meeting in Coral Gables this afternoon. A great deal of information was revealed concerning the potential future of the Rickenbacker Causeway. Basically the county wishes to allocate 25 cents of every toll collected to proposed projects promoting pedestrian and bicyclist safety.

Here's a summary of projects:

The reception from cyclists/pedestrians was mostly positive with the exception of a few concerned with the potential of the SunPass only lanes encouraging speeding. Also, some "group ride" cyclists were not too fond of U-turns being prohibited at the toll. The proposed traffic light also raised some eyebrows as it can make stopping after the swift westward decent off the William Powell Bridge a bit of a challenge.
More info here.
Newer Post Older Post Home