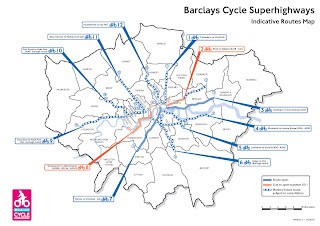 The Barclays Cycle Superhighways opened up last week and so far, so good. I happen to have a connection to this project since some of my colleagues across the pond are the designers (you can see a slight resemblance to the No Excuse Zone model). The project received criticism just like it would have here in the states, but none the less they installed the system and the world didn't implode as some felt that it might. Just imagine if your city proposed to paint 8 feet wide blue lanes down some of the main streets. Not to mention the different bike advocates that would find some reason to think that they would make cycling less safe. We'll see what the safety record is in a few years and can make our judgments about that when it happens.

The Superhighways were developed to improve cycling conditions for people who already commute by bike, encourage those who don't to take to pedal power and keep fit, help cut congestion, relieve overcrowding on public transportation, and reduce emissions. The project is one of TfL's and the Mayor's main ways of bringing about a London cycling revolution. They aim to increase cycling in London by 400% by 2025 (compared to 2000 levels).

Click HERE if you want to read some frequently asked questions and answers.