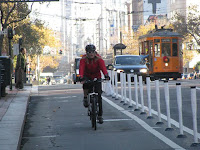 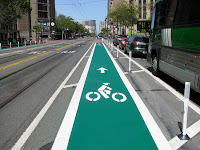 There is good news for cyclists coming out of Chicago today. A half-mile stretch of Kinzie Street between Milwaukee Avenue and Wells Street will be used to test out the city's first protected bike lanes.

42nd Ward Ald. Brendan Reilly announced the pilot program in his newsletter Friday. The cycle track, places all motorized traffic to the left of the cyclist, with the lane protected either via a construction barrier (like these), a raised median or other divider; the Kinzie pilot program will use flexible posts.

The program is being funded by a $3.2 million federal grant awarded to the Chicago Department of Transportation, who were originally going to test the program on a stretch of South Stony Island Avenue where bicycle traffic is infrequent before switching to Kinzie. 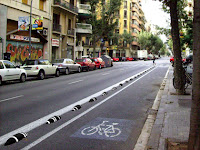 Bicycle transportation advocate Steven Vance is cautiously optimistic about the location. Others think it's a bad idea to place the cycle track in an area they feel won't attract new cyclists and, given some of the inclines along the route, may lead to a logjam of cyclists at points.


By looking at it on Google Earth, I'd be more inclined to see it in an area that sees some serious bike traffic, like the intersection of Grand, Milwaukee and Halsted. Or maybe near the area of Wicker Park where the city will get its first designated Bike parking area. Regardless, it's a start and I am optimistic to see the results. It could be the beginning of making Chicago even more bike-friendly, coupled with legislation awaiting Gov. Quinn's signature that will allow bicyclists and motorcycles to make "slow stops" at red lights and stop signs.
Newer Post Older Post Home