If the Amish Aren't Scared Why Are the Bikers

I have been away to visit my family for the holidays, and it always surprises me to go to rural areas of our country where riding a bike on the road is very taboo. I am from Kentucky originally, and even though cities like Louisville are making great strides to increase ridership, many of the rural areas just don't have any momentum to get people to ride. The roads are perceived as dangerous because they are winding, hilly, and even though posted speeds are 55, most locals drive 65+ on the narrow 2 lane roads. If there was a shoulder or somewhere to get out of the way from speeding semis, I could see more people riding there in the pretty, country landscape, but just the thought of getting creamed by a vehicle topping a blind hill or corner doesn't appeal to many. I do remember as a teenager riding my mountain bike on some back roads, but I also remember getting honked at while riding slowly up a hill. It does feel good to get back to civilization and only have to worry about being doored, sideswiped at intersections, and verbally abused by impatient drivers. 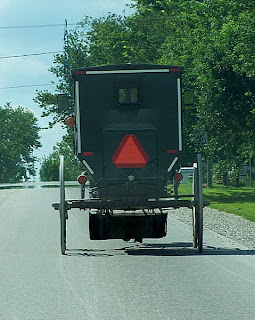 Riding in Kentucky is not much different than riding here in Florida, other than the amount of people that do it. When I think of slow moving vehicles on the rural roads, there are plenty. On any given day, the state highway that passes in front of my parent's house could have farm machinery, livestock moving from one farm to another, and Amish horse and buggies all using the road. You do occasionally here of an automobile hitting a tractor, a cow, or a buggy, because someone wasn't paying attention, but as soon as these objects are known to be traveling down certain roadways, people start looking out for them. 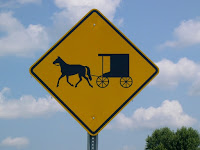 I love Amish buggies, because they are a good example of simple transportation, and are good tests for roadway safety for bikers. A road bike can pass an Amish buggy like it was standing still, so the speed of the buggy has no bearing on its ability to travel on the road safely. The size of the buggy is pretty noticeable, but it is painted black so a distracted driver could plow into the back of it as easy as a peloton of brightly colored, Lycra clad cyclists. As soon as a group of Amish moved into the same area as my parents, the DOT posted yellow highway signs warning drivers that Amish buggies may be in the area. Ironically I don't think that the Amish argue that they are being considered a second class citizen by getting a yellow warning sign instead of a sign that states they can "Use the Full Lane", they are just happy to have a sign.

I have hopes for my old stomping ground. There are cycling clubs starting up all around and it is only a matter of time before they strike out on the rural highways for their weekend warrior rides in the countryside. Then they will start to have people calling the police to tell them they don't belong on the road, and they may be even lucky enough that the state enacts laws that forces them to ride in bike lanes if they are present. Of course they will have to get some bike lanes first to have to worry about that.

Wherever you may ride your bike, the sacrifices to ride are always greater somewhere else, and the biggest advocacy that anyone can do is to just get on their bike and ride. Showing other people that it can be done gives them a little bit more confidence and encourages them to try it themselves.
Newer Post Older Post Home