skip to main | skip to sidebar
When asked "What came first, the bikes, or the bike lanes? Do bike facilities encourage people to bike? Or are they a response to increased demand after there are more bikes on the road?" 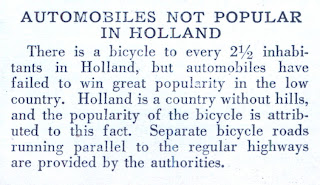 One good image from an newspaper article was posted at Modern Mechanix, showing that bike lanes existed in 1928. Below is this cool video telling the history of bike lanes, which explains how they date back to Napoleonic times.

The film explains that there were not a lot of roads in the Netherlands; the primary means of transport was by canal boat. Road building was tough in the soggy soil. Napoleon build a network of roads, but they deteriorated rapidly. When the bike came along, the Napoleonic roads were narrowed and given over to bikes. By 1905 there were strong rules to keep cars and carts off the bike lanes, and soon trees and hedges were planted between the bike paths and the new roads being built to accommodate the car.

So in fact, the bike lanes did come first. Copenhagenize posted a great series of historic photos showing masses of cyclists from the 30s into the 70s. While there was heavy bike traffic even on streets without bike lanes, it’s clear Copenhagen had bike lanes and sidepaths even in the 1930s.
Newer Post Older Post Home