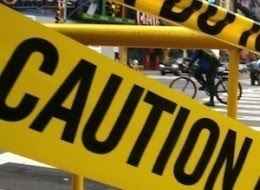 A Green Party candidate running for U.S. Senate in Maryland has died after being hit by an SUV while riding her bike. Maryland State Police say 30-year-old Natasha Pettigrew died early Tuesday. She was hit by an SUV in Prince George's County early Sunday. Police say the woman driving the Cadillac Escalade that hit Pettigrew kept driving nearly four miles to her home, even though the bicycle was still lodged underneath the vehicle. Police say the woman thought she hit a deer or a dog and didn't want to stop in the early morning hours. When she and her husband found the bicycle under the SUV, they called police.

In cases like this, you never know what the circumstances were about the crash. Was she not riding with lights or reflective clothing? Was she wearing a helmet? Was she riding on the shoulder, bike lane, road...? Was the driver of the Escalade texting, eating breakfast, doing her makeup, sleepy...? We may never know many of these answers.

The main question to ask after this tragedy is; what do we do to help prevent these senseless crashes? The more I see other examples of cycling cultures, and the way that people address cycling and safety, the more I have to think that controlling vehicular speeds, increasing the number of cyclists on the roadways through various methods (facilities, bike sharing, education, marketing, etc), and cracking down on driving with distractions and following proper cycling rules, are the best ways to help protect cyclists and create a balanced/livable transportation culture on the roadways.