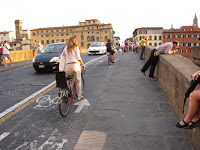 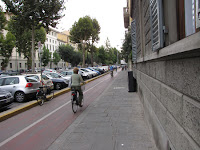 Italy seemed to be like many places here in the US or other cities in the world. They are facing an increased number of cars and multiple modes of transportation on their roadways. Unfortunately for them, most of their roads are 100s if not 1000s of years old and right of ways are designed for horse and cart and not large automobiles. Italy has done like many places in Europe and developed the use of smaller cars and vehicles and really embraced scooters. 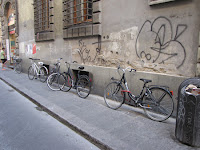 A few cities that we visited are pushing their new infrastructure and transportation policies toward livable transportation initiatives. Cities like Rome, Florence, and Milan have implemented colorized bike lanes, tons of bike parking, and bike sharing programs. They also seemed to have a culture in place that embraced cycling and automobiles gave cyclists and pedestrians the courtesy they deserve and gave them priority on the roadway. 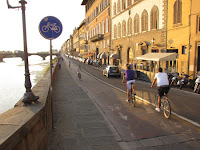 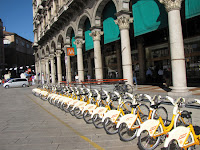 By talking to a few of the locals and doing a couple of rides out in the country, I found a few things that weren't apparent at first glance. Just like it is here in the US, bike theft is a huge problem and any bike that you want to still have in the morning, you have to bring it inside. Bikes during the daylight hours were safe with a small cable lock or even just leaned up against the wall outside the store you may visit. Bike helmets were only worn by road riders in spandex group rides. There were no laws regulating them and commuters didn't even consider them. E-bikes are very prevalent and seem to be making the jump into the mainstream much faster than they have here.


These are just some general observations from the few weeks that we were there. I am going to break down a few of cities into more detail on future posts, so look for those this week. 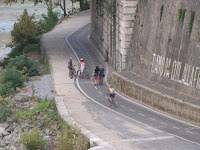