Many drivers see the white stripe on the inside edge of a bike lane as a guide to keep them on the road and to give them a visual cue of where their lane boundaries are. To cyclists these markings help direct them away from the traffic travel lanes and give them a buffer from passing cars. Academically I knew these principles to be true, but the power that these little white lines have, became evident in today's rides.

Orlando has several bike routes and different types of on-street bike facilities. On my main route into work I encounter an interesting bike lane that is an over-sized 4' concrete gutter pan along the curb. The travel lane is paved with historic brick and the car traffic tends to straddle the gutter and have a faster, "half smooth" drive. When riding on this route I have had cars tailgate behind me, pass me and immediately cut back in front of me, on garbage day all of the trash cans are lined up in the lane, and of course when it rains the gutter is submerged in water. This of course pushes the cyclists out of the safety of the concrete gutter and onto the rough bricks and into the travel lane. 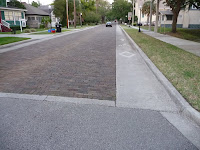 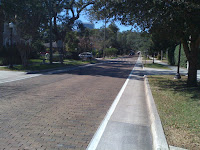 The city decided to paint a white stripe along the road edge of the lane, and have the paint delineate the space better than the material change did. In my first ride on the new facility, I encountered cars that were driving in the gutter, but when the came to the portion that was painted, they immediately moved back into the travel lane and stayed there. Of course they returned to the gutter when the striping ended, but it was obvious that the paint had mysterious, magical powers that kept cars away from it.
Currently the white stripe extends about half a mile on each side, but I hope that the city will evaluate this facility and see that with the expense of a just little paint, it can go a long way in providing a safer route for cyclists and motorized vehicles alike.
Newer Post Older Post Home